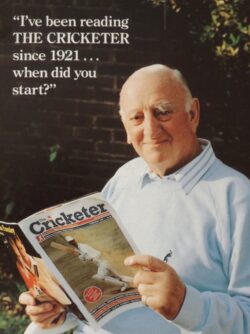 “The popularity of and interest in cricket not only here, but in every part of the world where Englishmen are gathered was never greater than at the present time.”

With these words written in April 1921, editor Pelham Warner began the first issue of the Cricketer Magazine which now celebrates its 100th birthday.

“The editor believes that there is room for such a paper as THE CRICKETER which will endeavour to comment fairly and accurately on first class cricket but also on club services and schools cricket,” added Warner, known as ‘Plum’ to his intimates. In 1921, he was a recently retired Middlesex captain who had also led England.

He later became a knight of the realm for services to the game and by his death in 1963, the ‘Grand Old Man’ of English cricket had done just about everything it was possible to do in the sport.

The first issue cost the princely sum of sixpence and included ‘My reminiscences’ from Gilbert Jessop, an attacking batsman with Gloucestershire known as ‘The Croucher’, who might have given Ben Stokes or Jos Buttler a run for their money.

There were hints on batsmanship from Surrey’s Donald Knight but not a ‘reverse sweep’ in sight.
Prospects for the new season featured the County Championship debut of Glamorgan.

“If they have the luck to be blessed with good weather, it should give a fillip to the county finances which will make for good in the future,” said the magazine. 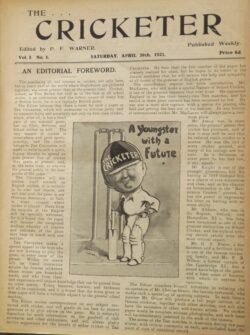 The magazine also looked ahead to the Ashes. The Australians, led by their formidable skipper Warwick Amstrong, had beaten England 5-0 in 1920-21. They were to win almost as convincingly on English soil in a ‘back to back’ series to retain the Ashes.

The first issue of the magazine prompted ‘kind letters of encouragement’ and also encouraged the publishers to invite subscribers at 14 shillings (approximately 70 pence in today’s money) for a year’s supply, which also included a Christmas annual.

The Cricketer appeared every week during the English season and was to do so right until the late 1960s.

The mast head has changed roughly once a decade, the numbering system almost as often, a little eccentricity corrected just in time for the centenary.

It merged with the rival Playfair Cricket monthly in 1973 and, for a few years in the new millennium, with Wisden Cricket Monthly but is now once more known simply as ‘The Cricketer’. Its webpage currently displays memorable covers from 100 years.

In 1975 it even published the official report of the first cricket World Cup, then coyly referred to as ‘International Championship Cricket’.

Appropriate perhaps since Ben Brocklehurst, a former Somerset captain turned magazine executive at The Cricketer, had suggested the idea in the first place.

The Cricketer also launched a cup for old boys teams and in 1972, the Village Knockout competition began, offering the dream for every village player, the chance, however distant, to play a final at Lord’s.

There was also wider coverage of women’s cricket. The legendary cricket writer E.W. Swanton described how Warner had been ‘captivated’ by a meeting with England captain Molly Hide in 1937 and agreed to help publicise the women’s Game.

However, coverage was limited to a single page even in the seventies when incumbent England captain Rachael Heyhoe Flint wrote a monthly column. 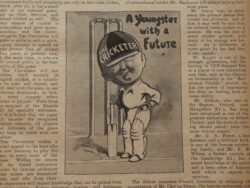 In 1976 the magazine covered the entire women’s series against Australia, though elsewhere in the magazine there was a photograph of opening delivery when England’s women played at Lord’s for the first time.

The seventies also saw the launch of ‘The Cricketer Quarterly Facts and Figures’, billed as ‘not just a mass of valuable statistical information, but a cricketer’s bedside book as well!’.

Photography in the magazine was strictly black and white right up until the late sixties. Even in the early seventies colour was a rare treat, though when it did appear, it often featured the work of SJA stalwart Patrick Eagar.

Those who succeeded Warner in the editor’s chair included Swanton, Reg Hayter and Christopher Martin-Jenkins.

One of CMJ’s Test Match Special colleagues fronted an ad campaign for the magazine in the early nineties. Brian Johnston, or ‘Johnners’ to his legions of fans, was shown reading the magazine, just as he’d done as a nine year old in 1921.

The present day editor Simon Hughes has also forged a career as a broadcaster. He was ‘The Analyst’ for Channel 4’s first spell covering test cricket.

He completes a circle back to the founder. Like Warner, Hughes spent the majority of his career with Middlesex.