Veteran cricket journalist David Warner has rolled back the years with an extraordinary book about English sporting icon Brian Close.  Warner, the Bradford Telegraph & Argus’s Yorkshire cricket correspondent for more than 40 years, has revealed a side to Close surprisingly at odds with his tough public persona.

And the 78-year-old says it was by chance that he came across a treasure trove of personal letters and memorabilia written by Close following his death at the age of 84 in September 2015. The result is a new book ‘Just a Few Lines…Unseen letters and memorabilia of Brian Close’ which has been published by Bradford-based Great Northern Books, thanks to Warner’s journalistic instincts.

“Brian Close was one of the toughest people to play cricket but he was just as handy with pen and paper as he was with bat and ball,” Warner told the SJA. 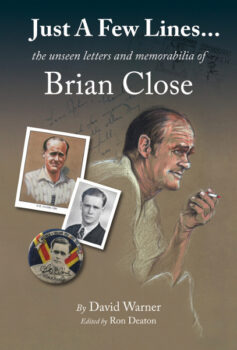 “It was an altogether softer side to him that hardly anyone knew about but thankfully his treasure trove of letters came into my possession by accident and inspired my book. It came about after I’d gone to see Brian’s widow, Vivien, a few weeks after his death to see if there was any memorabilia she wanted to go to the Yorkshire Cricket Foundation.

“That was when I discovered a dusty old suitcase packed with autograph books and letters Brian had written overs the years to lifelong friend, John Anderson. I couldn’t believe my eyes.”
Close and Warner had become good friends but after the initial shock, journalistic instincts prevailed over sentiment as he pored over the letters.

“When I saw what he’d left I saw it as a journalist – that there was a great story there just waiting to be told,” said Warner who started his career in 1958 with the Shipley Guardian. “Most sports followers would be forgiven for thinking he was one of those uncompromising sportsmen who couldn’t do anything else in life.

“But I knew his early schooldays showed he was very clever and he was even being encouraged to set his sights on Oxbridge and become a doctor until sport took over and so that side of his character never developed.

“And here, right before my eyes, was a collection of thoughtful letters that confirmed there was a lot more to Brian Close than met the public eye.”

The letters were penned in the 1950s as Close was trying living for himself as a cricketer and as a footballer with Leeds, Arsenal and Bradford City in addition to doing National Service in the Army.

They describe his first season with Yorkshire in 1949 when he achieved the double of 1,000 first class runs and 100 wickets in addition to becoming England’s youngest Test debutant at 18 years and 149 days.

And they go on to recall his Test tour of Australia in 1950-51 and MCC’s controversial unofficial tour of Pakistan in 1955-56 which was almost called off after an umpire was doused with water by some of the England players at the team hotel.

Together with Ron Deaton, who has painstakingly edited the book, Warner spent countless hours copying letters and photographs. They are now a part of the Brian Close Collection of Memorabilia under the ownership of the Yorkshire Cricket Foundation.

“First and foremost I’m essentially I’m a newspaper reporter and that’s why I found it such an interesting subject,” Warner continued. “If you see something that’s a good tale you want to tell it and that also applied when I was covering Yorkshire from the press box for the T&A.  It was never about me being there to cheer to team on – I was to write about the Yorkshire on and off the field.

“I certainly wasn’t a PR man for Yorkshire – I was a cricket writer for the T&A who paid my wages. And I always wrote with cricket followers in mind but this book transcends the game because it’s more of a social history.

“And I have to admit I’m happy to have written this book and added to people’s knowledge of Brian Close and his writing skills and adventures in the early days of his career. What’s given me pleasure is that it’s a good read.”