It was probably Norwich City’s greatest ever result yet it led to a host of defections from the club. ERIC BROWN reviews a new club history.

Tuesday October 19, 1993, was the day Norwich City dealt a huge blow for English football against the big guns of Europe.

Norwich, along with other English clubs, had previously been robbed of European adventure by a ban following the conduct of Liverpool fans at the 1985 European Cup Final. 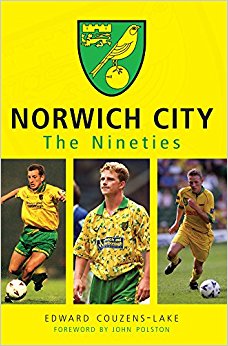 They finally made their European bow eight years later, seeing off Vitesse Arnhem 3-0 on aggregate. Those of us who covered City’s UEFA Cup campaign recall the tie mainly for a tortuous return trip from Holland after the goalless second leg.

The official club party and assorted journalists should have been back at Norwich Airport before midnight. But a supporters’ flight overshot the runway and the airport closed for safety reasons.

This meant a flight diversion to Stanstead where players, directors and journalists milled around for hours while coaches were booked to take us all back to Norwich to retrieve our cars.

I returned to my Kent home just as the milkman arrived!

Anyway City’s reward was a second round tie with Bayern Munich, three times European champions. No British team had ever won in European competition in Munich’s Olympic Stadium and the current Bayern outfit were skippered by Lothar Matthaus who lifted the world cup three years earlier.

It seemed like the end of this particular campaign for City. Yet the Canaries sent shock waves through Europe when they won the first leg 2-1 thanks to a Jeremy Goss “goal of the season” volley and a Mark Bowen header.

The second leg at Carrow Road ended 1-1 and Norwich were through only to be knocked out by Internazionale in the next round. Norwich had shown they could compete with the best in Europe despite being mainly composed of other clubs rejects like ex-Spurs Ian Culverhouse, John Polston, Ian Crook and Bowen.

They had finished third in the inaugural Premier League season but after their brief European excursion Norwich fell away. Supporter Edward Couzens-Lake reveals the reasons why players and manager defected to other clubs in his in-depth history of Norwich City in the 1990s.

It’s a must for Norwich fans and club history enthusiast everywhere.