Stuart Simmonds may not have made it as a top cricketer but his tales with ball and bat make for an entertaining book, reviewed by NICK TOWNSEND

Stuart Simmonds was a dreamer, fixated by a desire to play cricket from the moment he watched David Gower stylishly lay bat on ball on his Test debut against Pakistan in 1978.

Such aspirations were never matched by reality. Simmonds represented the Sussex Cricket Board in a single List A match against Hertfordshire in the 1999 NatWest Trophy, scoring an unbeaten 14 runs, and taking two wickets at a bowling average of 25.00. And that was it. 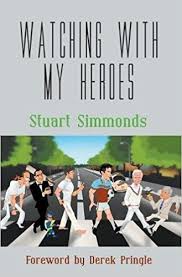 While that may not make him an obvious contender to write an autobiography on a life in cricket, Watching With My Heroes is an intriguing read which will resonate with many who have attempted, but ultimately failed, to make the top level.

Simmonds has spent much of his life playing and coaching the game. He was an overseas player in Australia and South Africa and, in his book, relates his battles with, among others, Kepler Wessels, Andy Flower, Brett Schultz, a young Jacques Kallis and Herschelle Gibbs.

In one of many anecdotes, Simmonds relates how he feared one shouting match he had with Wessels during a game would lead to some form of punishment. In fact, the former South African captain was so impressed with Simmonds’ attitude, he requested he came down to the nets to bowl at him for the rest of the season.

Simmonds pours scorn on the thought that he could have been “a contender”. As he concedes: “So who am I, after all? To be honest, although there were times when I might have believed otherwise, I’m nothing extraordinary and probably never was. I didn’t play for England, I barely played any county cricket, didn’t ever have a model girlfriend, and I’ve never been lucky enough to have any lucrative sponsorship deals, or regular spreads in OK or Hello magazine.” 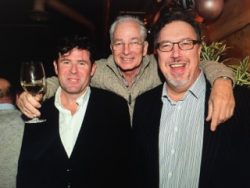 Yet, from his humorous, self-deprecating recollections, it’s easy to gain the impression that, had fortune and opportunity intervened, he could have made the transformation from a talented and enthusiastic club cricketer into a county player for his beloved Sussex.

Indeed, Derek Pringle, who wrote the entertaining foreword to the book and was present, along with David Gower, at the launch, describes him as “a keen and good club bowler, with wanderlust…when fate does conspire for their paths to cross, Stuart humbles Test and county batsmen with his canny seamers only to find himself stuck playing club cricket for the love and the money.”

Watching With My Heroes, by Stuart Simmonds (New Generation Publishing, £8.99) is available at Amazon.

The SJA British Sports Journalism Awards will be held at the Westminster Bridge Park Plaza Hotel on Monday, February 26. Details of entries and tickets HERE.