Leeds have recruited a manager full of self-belief and new ideas, some of them controversial, with one clear mission: make us an important football club again.

No, this is not Leeds United of 2018 hiring Marcelo Bielsa, whose reputation included coaching the Argentine and Chile national teams.

This is Leeds City of 1912 hiring Herbert Chapman, once a Tottenham Hotspur player, more recently player-manager and then manager of Northampton Town. 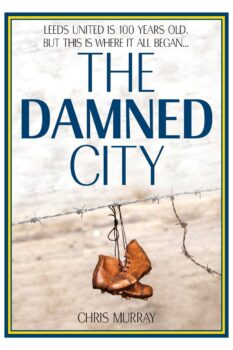 You can’t help comparing the parallel situations as you read The Damned City, a fact-based novel by Chris Murray.

Leeds City were formed in 1904, were elected to the Football League in 1905 and were expelled in 1919 due to financial irregularities, mainly illegal payments to players during World War I. From the ruins of Leeds City, Leeds United emerged in 1920.

Murray was a features executive at the Daily Mail before setting up his own successful communications and publishing business. More to the point now is his love affair with United.

Murray says: “United have been in my heart ever since I first went to Elland Road in the mid-60s, and I was lucky enough to follow the great Revie teams.

“I always wondered about the demise of Leeds City. So I looked into events of that time before and during World War I. It became clear there was a story to tell – but I would have to fill in the gaps.

“That’s where the historical novel is so good. There were no complete records, so the imagination had to pull things together.”

The Damned City races through 680 pages of business intrigue, a dazzling young player who becomes a war hero, Chapman’s success in establishing City as a force in football, force, and the murky dealings that led to the end of City and the beginning of United.