Manchester City fans have come to expect goals galore and trophies a-plenty as the club sheikhs, rattles and rolls its way forward with the best players money can buy. But what about the dark days when their bank balance barely covered the milk bill?

They were at the end of their tether. City fans sat in disbelieving silence or filed away from the ground contemplating whether the cub could sink any lower.

December 1998 brought no reason to party or celebrate around subdued Maine Road. Only a late Paul Dickov equaliser prevented City going out of the FA Cup second round against Darlington. And now, just days later, 3,007 sad supporters saw their exit from the Auto Windscreens Shield at home to Mansfield. It was the lowest crowd ever recorded for a City first team game at Maine Road.

There was no relief in the League, either, as they then crashed 2-1 at York to go 12th in the third tier of English football.

Off the pitch events were also dire as the Platt Lane training ground complex suffered a holdup by baseball-bat wielding robbers. 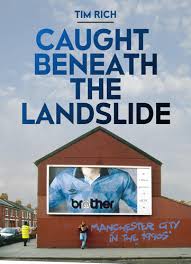 Janet Royle’s warning to husband Joe that he should not take the City job suddenly looked the best piece of advice issued since Abraham Lincoln was advised not to go to the theatre.

A lucky Boxing Day win at Wrexham earned Royle a reprieve and he stayed to win two promotions.

That dire performance in North Wales somehow re-launched a club perilously close to going out of the league – or worse.

Author Tim Rich, who wrote autobiographies of Andrei Kanchelskis and Ron Atkinson, focuses on the  controversies and the chaos of City’s darkest days and the characters at the centre of them, starting in 1989.

Remember Steve Daley ? Me neither. Only the incredible £1.4m Wolves banked for him. Later it was calculated each appearance by Daley cost City £26,000 – then the average house price in Manchester.

Swales took charge of the Daley negotiations and later missed a chance to redeem himself when he vetoed a £350,000 Allison bid for Chester City’s Ian Rush on the grounds that it was “too much for a reserve.”

Rich recounts the club careering from one tempestuous situation to another during a disastrous but never dull spell most City fans who were there are attempting to forget.

Caught Beneath the Landslide, Manchester City in the 1990s by Tim Rich is published by deCoubertin Books. Price £18.99 hardback.