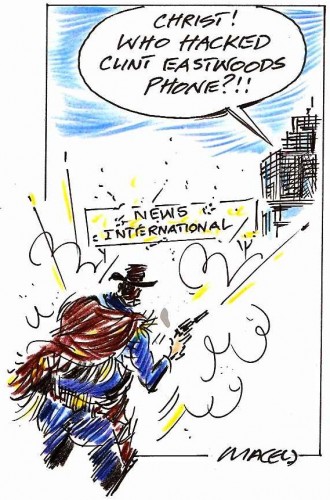 NORMAN GILLER goes all Claudia Winkleperson with a cast list that sees George Clooney starring alongside Sir Les Paterson for a big screen version of Hackgate. And he tries to take the F out of Facebook

Bet your bottom dollar that somewhere in Hollywood right now there is somebody writing a screenplay that will bring Hackgate to a cinema near you.

Let’s guess that their working title is Dial M for Murdoch, and the movie will try to follow the kind of tension and intrigue created by the Oscar-winning All the President’s Men. The difference, of course, is that it’s the journalists and newspaper executives who are in the firing line this time, rather than the politicians. It will be a classic case of shooting the messengers.

A good hacker could no doubt come up with a screenwriter’s wish-list cast. Here’s one I made earlier:

Ok, I’ve had fun with this. But it is hardly a laughing matter as the scandal staggers from one startling new revelation to another.

The danger for Lord Leveson is his Inquiry becoming not so much a film as a soap opera, Coronation Street re-titled as Fleet Street.

We are tuning into the daily broadcasts, and every Tom, Dick and Harriet is getting an earful of hot gossip that they can pass on to anybody they like (or even dislike).

There has been so much wild speculation, innuendo, hearsay and unsubstantiated statements made in the witness box that I just cannot see how anybody will be able to get a fair hearing when the action moves to a criminal court.

And (back to the Hollywood theme) you ain’t see nuthin’ yet. Wait until the “Press and the Politicians” come under the Leveson microscope. Our Hackgate film might then need a Ben Hur-size cast list.

Meantime, down at Fortress Wapping, a blanket of gloom has again descended after the brief light given by the rise of The Sun‘s Sunday edition.

A reliable source told me (how’s that for straight out of the tabloid school of reporting?): “We are suddenly feeling conned. This is not a new paper as much as an extension of The Sun, and we are being worked to our knees, all of us living in fear of losing our jobs.

“There is a ‘them’ and ‘us’ atmosphere, and despite Rupert trying to sweet talk us and tell us that the insider investigation is nearly finished, we feel the Gestapo are still in the building.

“It is no secret that two of our colleagues were driven to the brink of suicide by what is a witch hunt, and this week’s arrests of major players has just added to the general despair. Mind you, some of those taken into custody on Tuesday will find no sympathy here. We have been left to clear up their mess.”

Strong stuff, and you can hear similar things from the lips of many at Wapping, outstanding journalists who have been shot in both feet.

It will make a great film.

WHERE do you stand on swearing online? I withdrew this week from a Spurs Writers’ Club Facebook group that I set up because it had been hi-jacked by foul-mouthed visitors.

I can just about understand people swearing orally, but to type the F, C and W words indicates to me a lack of intelligence, respect and vocabulary.

Or am I being pompous and over-sensitive?

That is what I am accused of, among the kinder things aimed at me. Following my recent heart attack, I am on medication that is making me shoot from the lip more violently than in the past when I was such a gentle soul. My doctor has advised me to quit the stresses caused by heated debates on Facebook and Twitter.

He found my blood pressure sky high on Tuesday, and when I stupidly reported that on Facebook, one kind soul said: “Stop playing the health card and clear off.”

Whatever happened to respect and good manners? I go online for conversation not confrontation, but because I defend my mate Harry Redknapp against the rabid lynch mob on both Facebook and Twitter I get vile abuse that you would not pour on your worst enemy.

Stan Collymore, who is an inveterate and always interesting Tweeter, gets 100 times worse treatment than me, much of it of the unacceptable racist type of attack from keyboard warriors bravely hiding behind anonymity.

Stan is fighting back by reporting his tormentors. There are now legal eagles watching the chat forums, where libel and slander are rife. The “no win no fee” lawyer culture will soon be cleaning up online, and I have a couple of low-life people in my sights.

The social networks are a wonderful way of communicating, but they are being poisoned by cowardly types who have found ways to make a nuisance of themselves without risk of being found out.

Most of the “onliners” are decent people looking to chat in a rational, responsible and respectful manner using the Queen’s English, but the minority are spoiling it for the majority with their imbecilic behaviour.

No doubt I will get stabbed in the back for this little outburst. After all, we are into Ides of March territory. Et tu, Brute?

I think I’l write a film script about it.