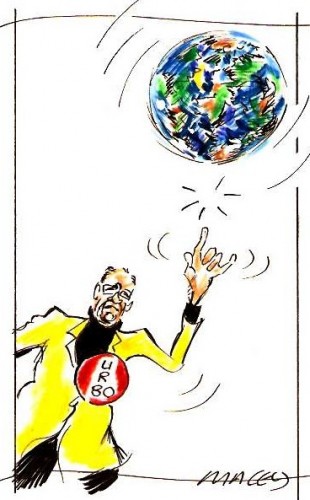 Many happy returns to Rupert Murdoch, the media mogul who is 80 today. The first personal birthday greetings he gets this morning will no doubt be from his mother, Dame Elisabeth, who is 102 years young.

Roop comes from genetically strong stock, so expect him to be around for a long time yet, and the Murdoch children circling his throne – principally Lachlan, James and Elisabeth – should not hold their breath. Prince Charles could perhaps advise them on the virtues of patience.

The Guardian dedicated its entire media section to the Murdoch milestone on Monday, and while it was illuminating and opinionated, not one of their team of experts gave Roop the sort of advice he needs as he joins the octogenarian club.

So here, as my special birthday prezzie to Roop, is open letter advice that could bring sunshine to the Wapping Walls:

You reach 80 in the same week that your Times newspaper was voted the first Sports Newspaper of the Year in the annual SJA British Sports Journalism Awards.

It was a joyous achievement that exceptional sports editor Tim Hallissey shared with the paper’s just-shy-of-half-a-million-readers. Meantime, Roop, the Daily Mail was  trumpeting the victory of Martin Samuel as Sports Writer of the Year (for a fourth time) to their 4.74 miilion readers, plus to the millions who visit their free-to-read website.

If you didn’t buy The Times or read the SJA website, you will have no idea that your paper triumphed by collecting such a hugely prestigious prize.

Of course, Rupert, you will recall meeting me back in the mid-1970s when I tried to sell you an idea for an all-sports newspaper. “It would die on its arse,” were your exact words. “The Sun coverage is so good that who needs to buy a paper that overcooks its subject?”

I bow to your omniscience as a newspaper master. You were born with ink in your veins, and had the energy, creativity and ­– let’s be frank here – the balls to build the Australian newspaper business you inherited from your father into a worldwide empire.A start like that does help. All my old Dad left me was a beer-stained upright piano (but you should hear me play Buddy Bolden’s Blues).

You have taken your Midas-touch instincts for the newspaper trade into the television domain, and have made a mint on both sides of the Pond and in Asia (although I remember before you merged Sky with BSB you were millions out of pocket). That really tested your nerve. Like I say, you have balls.

Now somebody in your organisation needs to show the same sort of balls and stand up to you. They need to tell you that your judgement has deserted you in the new world of the internet.

You lost a fortune purchasing MySpace at a time when any of us addicted to the social networking outlets could have told you it was being flattened by Facebook.

You have thrown millions into launching The Daily for the iPad, when I know from personal painful experience that it is going to be several years before the general public take to downloading books or newspapers. I have tried it with several e-books, including my latest football novel The Glory and the Greed, and can report zero interest. Every publisher I talk to reports similar download apathy.

Worst of all, Rupert, you have surrounded your online papers with paywalls. It is like being in a busy high street with your shops boarded up.

The way to do it is leave the door ajar. When visitors arrive at your websites the landing page should be warm and welcoming, with the message: “Come in and look around, see what is on offer”. Let them read teasing snippets of the articles from an army of some of the finest writers on the planet. Give them a taste of the fruit.

At the moment visitors face the intimidating task of form filling before they can get over the wall. I promise that 999 out of 1000 will quickly disappear to a website where they know the news is free and easily accessible.

You have had your early birthday present with the go-ahead to purchase the whole of Sky. Now give yourself another present by ordering at least the partial opening of the paywalls.

I bet within 24 hours of letting people in to look around, you will treble your subscriptions.

If you don’t take action each Wapping website will, uh, die on its arse.

HARRY REDKNAPP is an old pal of mine from when we used to stand shoulder to shoulder in the Bobby Moore drinking school at the Black Lion in West Ham, so I am biased in making a judgement of him.

But what he has achieved at Tottenham since taking over in the autumn of 2008 is fairly close to miraculous. They were rock bottom of the Premier League, and here they are now in the last eight of the Champions’ League.

People wonder what Harry’s secret is. Thimples: he has real soul and a love for football on which you can warm your hands.

He is a man motivator the equal of any manager in the land, and knows the importance of getting a great backroom team around him.

I hope personal issues do not stop him achieving his ambition of succeeding Fabio Capello as England manager. Aitch will know better than anybody how to piece together an England team that will reflect his personality and play with spirit and flair. But first of all he has a job to finish with Spurs, and he will be looking to take them as far as possible in Europe. What a great ride he is giving the Tottenham fans on his mission impossible.

The media does not have a better friend in football. He could show Rupert Murdoch a thing or two about being open and welcoming.