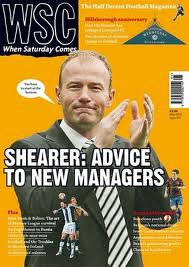 When Saturday Comes is celebrating its 25th anniversary. Since the first issue was published in March 1986, as a photocopied, hand-stapled production, WSC has aimed to provide a voice for intelligent football fans.

The publishers say: “We’re addressing an informed readership that takes a broad interest in the game at various levels. The typical WSC reader goes to watch matches even when the kick-off time has been rearranged to suit TV.”

Throughout 2011, they will be publishing a series of features under the banner “25 years of WSC”, each examining an aspect of football or football fan culture.

In WSC 290, on sale now, there’s a look at how the public image of supporters has changed over the period, from the football fanzine boom and growth of politicised fan movements in the late 1980s through to mainstream TV programmes such as Fantasy Football League a decade later.

Other topics to be covered over the next six months will include: the broadcasting revolution – what football has done for television and vice versa; the dramatic changes to the football-spectating experience, from crumbling terraces in the 1980s to the hightech all-seat stadiums of the 21st century; and how clubs that were once locally run
businesses have become part of a global corporate empire.

For further information about WSC’s 25th anniversary, contact the editorial team on 020 7300 7372 or editorial@wsc.co.uk