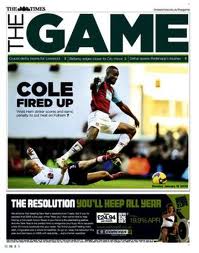 It was a whopping night for Wapping tonight, as The Times was named Sports Newspaper of the Year in the annual SJA British Sports Journalism Awards, while their near-neighbours, the News of the World, scooped the Scoop of the Year prize for the outstanding sports story of the year, the Pakistani spot-fixing scandal.

Judges complimented The Times on its all-round sports coverage, especially the football supplement The Game, but highlighted the exceptional cricket writing of Michael Atherton and Gideon Haigh.

Martin Samuel of the Daily Mail was crowned 2010’s Sports Writer of the Year, while Laurence Griffiths, of Getty Images, was named Sports Photographer of the Year.

The SJA awards, in their 34th year, are organised by the Sports Journalists’ Association of Great Britain and sponsored by UK Sport, and were presented at a gala dinner in the City of London.

The Times is the first winner of the new award, and was selected by a panel of distinguished judges, who placed The Guardian second and Daily Telegraph third.

Samuel was winning this prestigious crown – the John Bromley Trophy – for the fourth time, but for the first time as a Daily Mail scribe. One judge said: “No one in British journalism can forensically dissect an issue as brilliantly. His prodigious output always comes dripping in insight, intelligence and an instinct for justice.”

Griffiths, who lifted the Ed Lacey Trophy, stood out from the rest according to the judges, displaying a consistency across a range of subjects, all of them professionally executed.

The Sports Scoop of the Year provided a landslide victory for Mazher Mahmood of the News of the World, who broke the story of cricket’s spot-fixing scandal.

The prize for Sport News Picture went to Eddie Keogh, of Reuters, whose image proved conclusively that Frank Lampard’s shot for England at the World Cup crossed the German goal line by some distance.

For a gallery of some of the leading entries and winning images from the SJA British Sports Photography Awards, click here

Thanks: The SJA would like to thank our sponsors, UK Sport, and supporters, Victor Chandler, and to all the judges who volunteered to work on the 2010 British Sports Journalism Awards.

The judging: The Sports Writer of the Year award was decided by a vote by the sports editors of national newspapers. The Sports Photographer of the Year was determined by the judging panel, based on the outstanding work they had viewed for the awards.

All broadcasting awards were voted for by SJA members from shortlists produced by a panel of experts.

In the sports writing categories, each was judged by a panel of up to six judges, drawn from a range of publications, all with extensive media experience. Each judge worked on his portfolio separate for the other judges, and no judge was given a category in which anyone from their own publication was entered.

The judges were instructed only to judge on the work put before them, according to the distinct requirements of the particular category, and not on reputations or any other consideration.

Thu Mar 31: Tour of London’s Olympic Park. Click here for details of how to apply