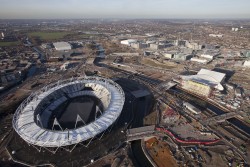 Another benefit of membership of the SJA can be enjoyed on March 31, with our latest tour of the developments of London’s Olympic Park.

There is no fee for taking part in this tour, where places are limited. Allocated on a first-come, first-served basis, SJA members will be given preference.

The tour may now be of particular interest to anyone who regularly covers West Ham United.

The SJA is again grateful to LOCOG, the 2012 Games organisers, for making this tour available to our members.

The coach tour begins from close to Stratford at 3.30pm, and you should allow at least an hour for the tour in Olympic Park to complete.

Since building work is still on-going on several Games venues, it is unlikely that there will be any opportunity to disembark the tour bus within the Olympic Park.

Full details of the pick-up point for the bus tour and the forms of identification required to access the Olympic Park will be sent to successful applicants.

The application process for the tour will close on March 23, when successful applicants will be notified.

To apply for a place on the tour, please email website@sportsjournalists.co.uk, placing “Olympic tour 2011” in the subject field, and provide your name, address, mobile phone contact number and SJA membership number.