Gannett, the giant US media company which publishes USA Today, has this week launched its first corporate branding campaign including a new logo and the tagline: “It’s all within reach”.

For many employees at the Gannett-owned Newsquest’s 17 daily paid-for titles and more than 200 weekly local newspapers in the UK, it is increasingly looking as if the only thing that is within reach is redundancy. 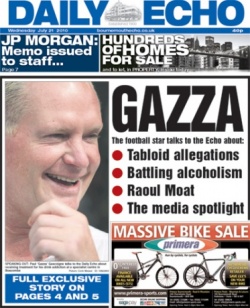 Today, HoldTheFrontPage is reporting that four subbing jobs at Newsquest’s south coast “hub” are at risk, barely six months after the centralised production centre was created. At least one job on the sports desk at the Southern Daily Echo in Southampton is also under threat.

Further along the coast, the Newsquest-owned Daily Echo in Bournemouth has announced that it could be making a number of editorial redundancies due to “future restructuring”. This comes in the wake of the newspaper’s subbing department moving to a new production hub at the Dorset Echo in Weymouth.

And in London, Newsquest titles have had their pagination reduced across several of their Guardian series of free weekly papers, the Surrey Comet and the Richmond & Twickenham Times,  and staff have been told that if any want to apply for voluntary redundancy, they will be accepted.

As Press Gazette reported: “The opening of the voluntary redundancy programme has raised fears amongst staff about the long term future of a number of Newsquest’s titles in the capital.”

Today’s news from Brighton and Southampton, where the merger of subbing operations last October led to a number of minor editorial cock-ups and complaints, is further dark news for the regional press.

The hub move last year saw five jobs go at The Argus in Brighton. Now, the 20 sub-editors working in the hub have been told that another four posts will be cut.

The National Union of Journalists’ chapel at the Echo will meet today to consider options. There have been seven days’ of strike action in recent months, with disputes over conditions still unresolved.

Management told staff that the subbing changes were being proposed due to “the need to seek greater efficiencies”.

Ian Murray, the Echo‘s editor in chief, wrote: “These proposed changes, if implemented, are projected to lead to the loss of four full time equivalent news subbing posts.

“Additionally it is proposed to streamline the sports department management team, which would result in the loss of one full time equivalent position.

“The proposed changes will include the creation of one extra assistant chief sub editor at Southampton to oversee pages from the Brighton/Sussex centre.”

A 30-day consultation begins on Monday.

In Dorset, the management’s message is much the same. “As we are all aware, trading patterns are still proving challenging and irrespective of the reduction in Dorset’s cost base last year, the company faces significant shortfalls in revenue in key categories,” said Newsquest Dorset managing director Vincent Bonnie in a memo to staff in Bournemouth, where four editorial jobs are believed to be at risk and freelance budgets seem certain to be axed.

The Bournemouth paper has already lost 18 staff since 2008. It, too, is staging a consultation period, which ends on April 1,  with the option of voluntary redundancy for those affected and the possibility of applying for other internal roles.