The Sports Journalists’ Association are delighted to announce the winners of their British Sports Awards 2020, sponsored by the National Lottery. Usually a gala event in central London, this year the awards were held via a virtual ceremony, hosted by Jim Rosenthal and streamed on YouTube and Facebook. 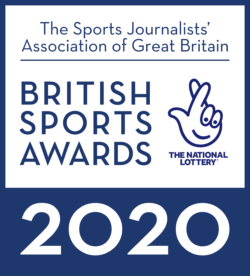 The SJA Bill McGowran Trophy for male and female para athletes of the year was awarded to Sarah Storey, winner of three golds at the 2020 track cycling world championships, and Alfie Hewett and Gordon Reid, wheelchair tennis doubles partnership, who completed the career grand slam with victory at the French Open.

The National Lottery gave their Spirit of Sport award to Kim Daybell, Polly Swann and Vicky Wright, who all stepped away from sport this year to serve on the frontline of the NHS during the coronavirus crisis.

Former chairman David Walker came up with the idea of widening our horizons and asking the membership to vote for their greatest sportsman and sportswoman of the past 70 years. Our former President, Michael Parkinson, and Jim Rosenthal recorded a fabulous conversation on the pros and cons of some of our greatest athletes – with a few great anecdotes for good measure.

This was a very different sporting year with the Covid-19 pandemic sweeping the nation while the Black Lives Matter movement struck a chord.

In recognition that sport should take second place, we decided to expand our Sport for Social Change awards and announced them in advance.