IAN COLE reports on the 2012 SJA British Sports Awards, sponsored by The National Lottery, at the Tower of London on December 6 that celebrated the greatest year in British sport – and the busiest for Britain’s sports journalists. And below, KEITH ELLIOTT gives his view of events as seen from Table 37

Photographs by ANDREW REDDINGTON of Getty Images and STEVE ROWE

The answer to the question on every sports fan’s lips since the Olympic flame was extinguished in Stratford in August was revealed today when Bradley Wiggins was named Sportsman of the Year this lunchtime.

Wiggins, Britain’s first winner of cycling’s Tour de France and the gold medallist in the Olympic time trial, topped the annual poll of Britain’s sports journalists which the Association has been conducting ever since the last time London hosted the Olympic Games.

In what was the most competitive field ever considered by the SJA members in the 64 years they have been staging these awards, Wiggins held off the challenge of Olympic 5,000 and 10,000 metres champion Mo Farah, and US Open and the Olympic men’s singles tennis champion, Andy Murray, who was third.

Wiggins’ success was cheered by a sold-out hall of 600 guests from sport and media in The Pavilion at the Tower of London, the event sponsored by the National Lottery. The four-time Olympic gold medal-winner succeeds his Team Sky Tour de France team mate Mark Cavendish as the British Sportsman of the Year. Wiggins, following his recent bike accident and training demands, was unable to be at the event, but he sent a good-humoured video message which was played out to the audience.

Europe’s Ryder Cup team, including seven British golfers led by Ian Poulter, Rory McIlroy and Luke Donald, were runaway winners of Team of the Year, having retained the international golf trophy in the United States with the greatest last-day comeback ever seen at the event.

The SJA awards were first staged in 1949 and are the country’s longest-running sports awards. They are voted by a membership of more than 750, made up of sports writers, broadcasters, photographers and editors.

Since 1963, the Disabled Sports Personality of the Year has recognised the achievement of an athlete with a disability. With the huge success of the Paralympics, two awards were made this year with David Weir – winner in 2006 – taking the men’s prize and Sarah Storey the women’s.

With SJA President Sir Michael Parkinson making some of the presentations, compere Jim Rosenthal introduced a number of other awards, including the JL Manning Award for an Outstanding Contribution to Sport, which was presented to Lord Coe, chairman of LOCOG, the London Olympic and Paralympic organising committee.

As special guests of the SJA at the event was a table of GamesMakers – volunteers who did much to make the Games such a great success. The 10 GamesMakers guests had all worked in the media rooms at sporting venues during the Games.

Ennis was also named as the winner of the Pat Besford Trophy for the outstanding performance of the year, having broken the British heptathlon record as well as winning the Olympic gold medal during the season. She received this award from Andy Duncan, from sponsors The National Lottery.

The International Newcomer Award is a regular puzzler for the SJA’s judges, who have to decide which British competitor, in their first season of international competition, has made the biggest impact. And having made their choice, the same judges were given an anxious wait over lunch for Alex Oxlade-Chamberlain, the teenaged England winger, to arrive at the Tower, hot-foot from his latest Arsenal training session in north London that morning.

The youngster accepted his prize with some genuine delight, and delivered a suitably off-beat acceptance speech to endear himself to the audience.

Barry Newcombe, the chairman of the SJA committee which organises the awards, was allowed to make a special presentation of his own, after seven years in the chair. Newcombe, who has covered Wimbledon since 1965, chose doubles tennis player Johnny Marray, who won the Wimbledon title with his Danish partner after only getting into the tournament on a wildcard.

“It’s been probably the greatest year in the history of British sport, and certainly one of the busiest for our members,” Newcombe said.

“This year’s awards were twice the size of the event when I became chairman, and we are extremely grateful for the support we have received from The National Lottery, who we were delighted were able to come along and share in the celebrations with so many of the great competitors who they have helped fund through their sporting careers.” 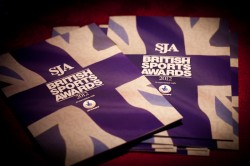 The greatest year for British sport. And the best ever British Sports Awards? Certainly a great afternoon for autograph hunters armed with their SJA menu card, as KEITH ELLIOTT discovered

Great execution, we all agreed. Not the stuff that the Tower of London is notorious for. Nobody to my knowledge left the Sports Journalists’ Association 2012 British Sports Awards a head short of a full body – though there were a few, as afternoon blurred into evening, who were well on the way to becoming legless…

And it was a memorable occasion at the Tower’s Pavilion, even if the entertainment was Martin Kelner and Jim Rosenthal rather than a man swinging a large axe.

Of course, it was helped by being the climax to an extraordinary sporting year. That said, the turnout for a lunchtime on a freezing Thursday in the capital was a celeb spotter’s dream.

Even the waitresses were all a-flutter. “I really want to serve Jonnie Peacock his chicken,” one confided cryptically to me. Peacock, winner of the Spirit of Sport Award for his 100 metres Paralympics dash and his endearing personality, broke a few serving wenches’ hearts because he had been taken ill on the morning and couldn’t attend, the message from his agent the bane of our organisers’ day.

But it was a minor disappointment when SJA members and guests found themselves sitting next to the likes of Jessica Ennis, Michael Vaughan, David Hemery, Martin Offiah, Katherine Grainger and Lynn Davies, to name but a few.

If you were fortunate enough to be seated alongside someone young, glam and wearing a designer dress or suit, chances were that your neighbour was not a sports journalist. Or Laura Williamson.

Most of us SJA members try hard, goodness knows. But as my wife cruelly announced, trying to smarten up a sports journo is like pouring perfume on a pig. Most awards ceremonies are pretty dull – unless you win something, that is. But this was a bit different from the weepy affairs where everyone down to the producer’s dog gets on the “without whom” thank you list.

Journalists ought to ask questions, shouldn’t they? And not just the sort of mindless “How do you feel, Arsene?” stuff we hear all too often.

So our roving reporter Martin Kelner (“I gather Stuart Hall was not available”) and later Jim Rosenthal quizzed guests, some Games Makers, and all the winners, from Jessica Ennis to Alex Oxlade-Chamberlain.

Kelner alighted upon SJA stalwart Morley Myers, who was at the awards celebrating his 50th wedding anniversary with his wife Joy. How did his wife cope with Morley’s many years away from home, on the road for the various agencies he had worked for, Kelner asked. “She called those the good times,” said Morley, deadpan.

Ennis, who scooped Sportswoman of the Year for the third time in four years and the Pat Besford Award, presented by our sponsors The National Lottery for the outstanding performance of the year, is pretty slick at dealing with interviewers now. But Jim squeezed a confession from the lady in red: she plans to skip training on Christmas Day. You wanna know what it takes to be an Olympic champion? There’s your answer.

We also relived her high jump and hurdles performances. Glancing round the room, it was amazing how many hard-nosed hacks found a bit of grit in their eyes at that snatch of film…

A piece of film showing London being nominated as the Olympic venue, precursor to Seb Coe (sorry, Lord Coe) picking up the JL Manning Award for outstanding contribution to sport, drew a rather more boisterous reaction. Or was that because we recall the French reaction when they came second? Wonder how many of those “2012 Olympics: Paris” T-shirts they sold?

Coe also raised a laugh when he said: “As a Chelsea fan, this is the closest I will get to silverware this year…”

Jonny Marray, an unexpected winner of the Wimbledon men’s doubles with the Dane Frederik Nielsen after sneaking in through a wildcard, collected the SJA Chairman’s Award from Barry Newcombe, who’s covered our premier tournament for 47 years. He deserves an award for that, surely.

But Marray proved himself the antithesis of the typically dour tennis player, charming the sold-out 600 attendees with his humility and his obvious pleasure at winning, even if he did get a bit confused.

“It’s so kind of you to invite me here tonight,” he said. Must be all that travelling that screws up your circadian rhythms.

Arsenal’s Oxlade-Chamberlain, winner of the best international newcomer, was another who proved remarkably erudite (at least, for a footballer, and especially for a teenager – you had to remind yourself that he is still just 19).

While four-gold-winner Sarah Storey, in a sparkly dress that turned appropriately gold under the stage lights, won the women’s Paralympic award and audience’s hearts when she described how she felt in the velodrome. “You felt you family had grown by 6,000 people.”

George O’Grady, from the European PGA, was on hand to collect the Team of the Year award, mainly because the British players who had helped to win the Ryder Cup were, as ever, playing in tournaments in some far-flung quarter.

Though by bringing Sam Ryder’s golden trophy to our event, he gave several of our guests the chance to do something which the Americans have not been able to do for years: get their hands on the Ryder Cup.

Well, follow that, as they say. Will we ever see another year of sport – indeed, another SJA occasion – like it?

The Sportsman, Sportswoman and Team of the Year prizes were all voted for by the members of the SJA. The final results in each category were as follows, and demonstrate the utter quality of the contenders in 2012:

TEAM OF THE YEAR

Other awards, presented at the discretion of the SJA committee and sponsors, were as follows: