The question was easy, the answers not so much. We asked our members to vote for the SJA’s  greatest sportsman and sportswoman going back 71 years and, finally, all was revealed at the virtual British Sports Awards sponsored by the National Lottery, aired today and now available on catch-up at www.thebritishsportsawards.co.uk

Sir Michael Parkinson and Jim Rosenthal set the scene, from Jim’s living room, as they recalled past and present giants of the sport while many of our members pitched in with their choices. The George Best anecdote from Parky is a blinder, by the way.

Ennis-Hill was the British poster girl of London 2012. Despite the intense pressure of expectations at her home Olympic Games, her personality shone through as did her character.

It all came together on a glorious day for the nation as the three-time world champion and four-time SJA sportswoman of the year clinched her heptathlon gold medal on what has come to be known as Super Saturday thanks to the avalanche of British gold medals.

Ennis-Hill caught up with that day recently, she revealed to master of ceremonies Rosenthal.

She said: “There were no nerves, no adrenaline, no expectation and I could enjoy what had already been done. I knew the outcome. It was really enjoyable to watch for  the memories.

“It was and it still a kind of raw emotion with me. It was one of those  moments when I felt ready. I felt strong, injury free and in the shape of my life and I was ready to start that event.”

Ennis-Hill married and had a son, Reggie, after London before making a comeback which saw her win a silver medal at Rio 2016.

She added: “He gave me that huge motivation that made me want to come back to training, to get back on the track and show him and everybody else I could be the best athlete in the world again.” 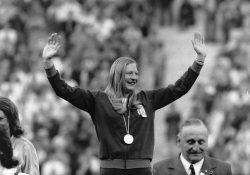 The image is black and white but still vivid. Mary Peters holds her arms aloft after receiving the gold medal for winning a gold medal at the pentathlon at the 1972 Olympic Games in Munich. She was 33-year-old and capped her performance with a world record.

A member commented: “A superb Olympic champion who has done so much in her post-sporting life for young people and the community.” 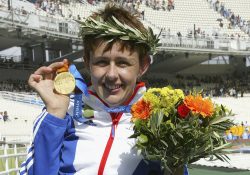 Just the 11 Paralympic gold medals for the wheelchair racer, who was only a terrific successful athlete in her own right, but a true pioneer for less able-bodied sports people the world over, and still knocking down obstacles in the pursuit of enabling sporting excellence opportunities for all Paralympians across the globe.

Everybody remembers the quote. It was Atlanta 1996 and Redgrave and rowing sidekick Matthew Pinsent had just won gold in the coxless pairs.

“If I get into a boat again, shoot me,” was Redgrave’s instruction. Four years later in Sydney the rower made history by winning a gold medal in five successive Olympic Games, this time in the coxless fours.

Looking back, his achievement was all the more remarkable because he trained and competed despite suffering from ulcerative colitis and Type 2 diabetes, as he tells Rosenthal.

Redgrave said: “I’m absolutely stunned, delighted that the sports journalists over the last few decades have picked me out, I am very humbled by it.

“I look back and I almost enjoyed almost every moment. Not all of it, not with the certain conditions I came down with and have to deal with today. Those two setbacks were pretty major.

“I thought diabetes was going to be the end of my international rowing career. Fortunately the diabetic centre I got sent to and the doctor who was looking after me was young and forward thinking and his attitude was ‘why not?’ He gave me the confidence to go for it.

“It wasn’t until after we had done it all that he said he didn’t have much of a clue as to how we were going to do it. He convinced me.”

Redgrave also reveals his choice for the greatest sportsman…go watch the video. 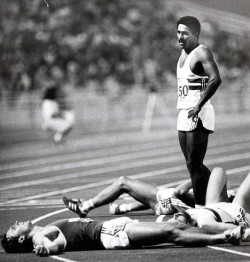 With four world records, two Olympic gold medals, three Commonwealth titles, and wins in the World and European Championships, Thompson is considered by many to be one of the greatest decathletes of all time.

As one SJA member put it: “The greatest British decathlete and all-round sportsman, and one of the best in the world.  Just as importantly a tireless campaigner against drugs in sport, the biggest problem in athletics and so many other sports.  An all-round great man.” 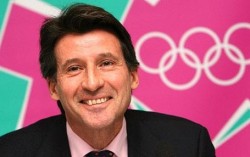 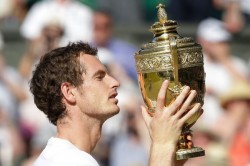 Murray: Has overcome adversity on and off the tennis court to win two Wimbledon titles and two Olympic gold medals – and become World No 1 –  in an era that is generally regarded as the strongest ever in the history of the sport. He was the first British man to win Wimbledon since Fred Perry 77 years previously.

Hamilton, Doyle and Liverpool FC are the big winners of 2020