It was a whopping night for Wapping, as The Times was named Sports Newspaper of the Year in the annual SJA British Sports Journalism Awards, while their near-neighbours, the News of the World, scooped the Scoop of the Year prize for the outstanding sports story of the year, the Pakistani spot-fixing scandal.

Judges complimented The Times on its all-round sports coverage, especially the football supplement The Game, but highlighted the exceptional cricket writing of Michael Atherton and Gideon Haigh.

Martin Samuel of the Daily Mail was crowned 2010’s Sports Writer of the Year, while Laurence Griffiths, of Getty Images, was named Sports Photographer of the Year.

The SJA awards, in their 34th year, are organised by the Sports Journalists’ Association of Great Britain and sponsored by UK Sport, and were presented at a gala dinner in the City of London.

The Times is the first winner of the new award, and was selected by a panel of distinguished judges, who placed The Guardiansecond and Daily Telegraphthird.

Samuel was winning this prestigious crown – the John Bromley Trophy – for the fourth time, but for the first time as a Daily Mail scribe.

One judge said: “No one in British journalism can forensically dissect an issue as brilliantly. His prodigious output always comes dripping in insight, intelligence and an instinct for justice.”

Griffiths, who lifted the Ed Lacey Trophy, stood out from the rest according to the judges, displaying a consistency across a range of subjects, all of them professionally executed.

Will the real Mazher Mahmood please stand up? That was the call as the News of the World was announced the winner of the SJA’s Sports Scoop of the Year award.

There was no doubt about the decision, the paper’s revelations last summer about a spot-fixing scandal at the very top level of international cricket, but when Donald Trelford opened the envelope and called up Mahmood there was a mixture of joy and amusement on the News of the World table.

After a few moments of shuffling in his seat, sports editor Paul McCarthy finally took the stage. It is not uncommon for bosses to collect awards on behalf of writers or photographers who are away on assignments. So we assumed Mahmood – aka “the fake sheikh” – must be at the cricket World Cup.

Except that McCarthy added to the intrigue by revealing that he had only ever met his award-winning reporter twice. “It’s great to work with him, a fantastic news reporter,” said McCarthy, to stifled sniggers from his colleagues at the table, journalists familiar with the manner in which the reporter known as “the Fake Sheikh” is as notorious as the Oscar-winning artist Banksy for avoiding public appearances.

No doubt about the impact of the story, though. The judges said this was the one big story dominating the second half of 2010 and still reverberating well into 2011. “This story dominated front pages, back pages, TV and radio for days.” Our winner, they said, “showed commendable enterprising journalism to nail the story. No one else was remotely in the same league.”

But could we nail Mazher Mahmood? Not on this night, certainly.

On a dazzling night when nearly 400 diners celebrated the very best in sports writing, photography and broadcasting, there were many grateful recipients accepting awards and thanking the usual suspects – sports editors, sub-editors, backroom teams, the guy who first believed in me and gave me a chance…

But one winner stood out – for his silence. Eddie Keogh, of Reuters, whose snap of Frank Lampard’s shot bouncing several feet beyond the German goal line at last summer’s World Cup took the Sport News Picture award, chose to follow Sir Alex Ferguson in refusing to speak to the Press – unless, he whispered to masterful master of ceremonies Jim Rosenthal, we took a bottle of red wine to his table! Different.

The award for the “best unprepared speech”, according to the excellent Rosenthal, went to Broadcaster of the Year Jonathan Overend, of BBC 5Live. Overend’s task throughout the previous weekend had been to persuade us that Britain’s Davis Cup Euro-Africa group match in Bolton was an important event.

That might seem worthy of an award in itself, though Overend – “bewildered, staggered, honoured” – to top the poll of SJA members, said his choice would have been BBC television’s Formula 1 presenter Jake Humphrey, who finished third, behind TalkSport’s Mark Saggers.

Even the Sports Betting Writer award, sponsored for the first time by Victor Chandler, had a cricket flavour to it. The winner, freelance Ed Hawkins, impressed the judges “writing in an entertaining way to make sports betting come alive – even to non-punters.”

Hawkins’ winning entry included a dissection of the cricket spot-fixing scandal and the writer made a point of thanking the three disgraced Pakistan cricketers – Salman Butt, Mohammad Asif and Mohammad Amir – “without whom I couldn’t have won”.

A standing ovation greeted Patrick Eagar as he came up to collect the Doug Gardner Award, the honour bestowed each year by the SJA officers on a member for “services to sports journalism and the SJA”.

As Eagar himself recalled: “It is all of 40 years ago that I went up to this very important person in an office and asked timidly if he would like to see some photographs I had taken.”

“Finding a suitable recipient is not taken lightly by the SJA’s officers,” Newcombe explained.

“That said, the claims of tonight’s recipient are remarkable.

“He has published 13 books, and we reckon that during his career he is well on his way to completing a half-century of overseas tours and knocking up a triple century of Test matches.

“He has also enjoyed the ultimate acclaim, both for himself and his craft, in having his work exhibited at the Home of Cricket, Lord’s, where no less an authority than the MCC described his photography as capturing ‘many of the most memorable moments in cricket history’.”

The night was significant as being the last, after eight years’ generous backing, of sponsorship by UK Sport of the SJA. Marking the occasion, chair of UK Sport, Baroness Campbell, made the presentations of the Sports Writer and Sports Photographer of the Year awards.

Here is a full list of winners of the 2010 SJA British Sports Journalism Awards, as presented in London tonight, sponsored by UK Sport. 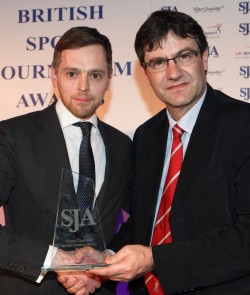 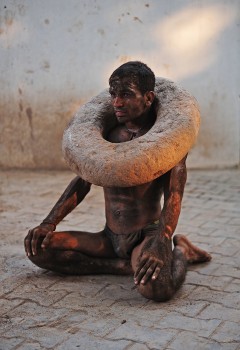 Thanks: The SJA would like to thank our sponsors, UK Sport, and supporters, Victor Chandler, and to all the judges who volunteered to work on the 2010 British Sports Journalism Awards.

The judging: The Sports Writer of the Year award was decided by a vote by the sports editors of national newspapers. The Sports Photographer of the Year was determined by the judging panel, based on the outstanding work they had viewed for the awards.

All broadcasting awards were voted for by SJA members from shortlists produced by a panel of experts.

In the sports writing categories, each was judged by a panel of up to six judges, drawn from a range of publications, all with extensive media experience. Each judge worked on his portfolio separate for the other judges, and no judge was given a category in which anyone from their own publication was entered.

The judges were instructed only to judge on the work put before them, according to the distinct requirements of the particular category, and not on reputations or any other consideration.

To view a gallery of a selection of the best entries from the SJA British Sports Photography Awards, click here