The Moscow Olympic Games opened on July 19, 1980. Four decades on, PHILIP BARKER tells the story of the part that Ian Wooldridge played as politics threatened to derail Britain’s involvement in the event

The name of Ian Wooldridge rightly adorns the SJA trophy for Young Sports Journalist of the Year.

Forty years ago he was the star columnist in the Daily Mail when his words upset Buckingham Palace and the Kremlin in the space of a few weeks – 1980 was by any measure, no ordinary year.

Moscow was to host the Olympic Games, set to be the most grandiose yet seen. Then, as Wooldridge put it: “The damned fools invaded Afghanistan.” 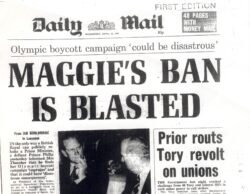 American President Jimmy Carter and Prime Minister Margaret Thatcher called loud and long for a boycott.  Wooldridge nailed his colours to the mast.

“Margaret Thatcher’s matriarchal concern for our country, you, me and the world, in roughly that order, is genuinely inspiring. I fear, however, that her advisers have failed her badly over her stand on the Olympic Games.”

Former Daily Mail sports editor and SJA stalwart Tom Clarke recalls: “Our stance was recognised by the editor, David English, who agreed, as the pro and anti-boycott saga went on, to allow us on the sports pages to take a ‘let’s go to the Games’ attitude.”

In May, Wooldridge covered a meeting of the Olympic sports federations in Lausanne. This discussed their response to political pressure. Among the delegates was the International Equestrian Federation, president Prince Philip.

Tomi Keller, the Swiss head of International Rowing, read the official statement: “The international Olympic federations, being aware of the reasons advanced by different governments for putting pressure on the National Olympic Committees to boycott Moscow, protest energetically against such pressure.”

In Wooldridge’s story he related how Keller: “Said deliberately and clearly ‘with Prince Philip’s authority’.  A lot of people collaborated in that statement. Prince Philip put the finishing touches.”

Wooldridge’s report was the front page of the first edition: “In the only way a British royal can publicly rebuke a Prime Minister, a defiant Prince Philip yesterday informed Mrs Thatcher that he finds her Olympic boycott campaign improper.”

By the later editions, the paper reported a Palace denial.

Clarke (left)  recalled: “Ian and I were angry at the way his piece in the Daily Mail suggesting that Prince Philip had contributed to a statement condemning a boycott of the Moscow Games had been watered down and denied the following day, but Ian (as far as I know) and I never threatened to resign.”

Wooldridge was sent to Moscow but found himself at the centre of another storm. At the spectacular opening ceremony, British Chef de Mission Dick Palmer carried the Olympic flag instead of the Union flag as part of an agreement against political interference signed by many European Olympic Committees.

Soviet tv cameras offered a close up of Palmer, but thankfully a unilateral BBC camera showed the full glory of the Olympic flag and the gesture.

Wooldridge wrote a typically forthright piece on the opening ceremony and later recounted the story for BBC Radio.

If he or any other journalist is expelled, I shall withdraw the entire British team from the Games

“Amazingly the only time we weren’t searched was entering the Lenin stadium on the only day Brezhnev showed up. He delivered his lethargic speech from a strange edifice, a three-sided bullet proof hut. What intrigued me was that there was no protection at the front and crouched before him were minimally 150 unsearched photographers mostly armed with those long lensed cameras that looked precisely like bazookas.”

In his newspaper report Wooldridge wrote: “The one thing you could easily have done from my seat was to have shot Leonid Brezhnev stone dead.”

Reuters reported later that week that Moscow 1980 vice President Vladimir Popov  warned somewhat menacingly: “That if it or other stories were found to insult the dignity of the host country, Soviet organisers would appeal to the IOC to take ‘most decisive measures against the journalists involved’.” 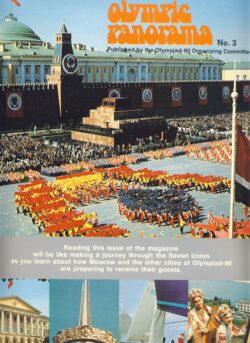 Wooldridge revealed later: “I was summoned by the Soviet authorities and given a fairly uncomfortable time.”

British team commandant Sir Denis Follows was also called in to be told that Wooldridge was to be expelled.

“If he or any other journalist is expelled, I shall withdraw the entire British team from the Games,” said Sir Denis.

Wooldridge stayed to tell the tale of gold medals won by Duncan Goodhew, Daley Thompson, Allan Wells, Seb Coe and Steve Ovett, all saluted incidentally with the Olympic anthem and not God Save the Queen.

With some understatement, Wooldridge said:  “Not to have denied the nation these came as something of a relief.”