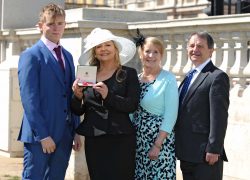 Alison Kervin is leaving the Mail on Sunday after an award-winning eight years.

The first woman sports editor of a British national newspaper, she was awarded the OBE for services to sports journalism three years ago.

“It’s been the most astonishing ride,” she tweeted.

“I’ve loved it – from campaigns and investigations to meeting lots of brilliant people and making great friends.”

Kervin was previously chief sports feature writer for The Times, chief sports interviewer at the Daily Telegraph and editor of Rugby World magazine.

After eight years as Sports Editor of the Mail on Sunday, I am leaving. It’s been the most astonishing ride. I’ve loved it – from campaigns and investigations to meeting lots of brilliant people and making great friends. Thanks to everyone on the paper x @DailyMailUK @MailSport

The Cricket Writers’ Club have negotiated with the England and Wales Cricket Board to extend their support of coverage for the domestic season.

All games in the women’s Rachael Heyhoe Flint Trophy and regional T20 will now be covered, in addition to all Royal London Cup games, funded by the First Class Counties.

This year cuts were made to the ECB Reporters’ Network, an agency-style set-up, funded by the governing body, that provides written-word coverage of domestic cricket to local, regional and national media outlets.

However, the CWC have campaigned hard to preserve as much independent reporting as possible.

“The CWC is delighted with this outcome, which follows extensive efforts by the club to ensure every professional domestic game is covered by an on-site reporter,” they said.

“This upholds the integrity of the written reportage, ensures outlets have access to reports of every game in every domestic competition, and guarantees players and teams an accurate, historical record of their feats.”

A lot of work went into achieving this outcome because the ECB Reporters’ Network is invaluable in providing reliable domestic cricket reports to outlets who can’t send to grounds. So pleased that there will be proper eye-witness coverage now of all men’s & women’s comps. https://t.co/AkKSx9w6Ne

Wimbledon expect the number of journalists on site for this year’s Championships to be significantly reduced.

Following the example set by the US Open, French Open and Australian Open, the All England Club expect many to cover this year’s event remotely – with press conferences on Zoom and live match feeds and scoring on a password protected media portal.

There’ll be no hot desking and increased social distancing, while the press agency rooms will be closed.

Those in attendance will still attend media conferences remotely, with no access to the Aorangi practice courts.

It is also expected no media will be allowed at the qualifying tournament while a decision has yet to be made on whether those attending will need to show ‘proof of Covid-Status’ – either a vaccination or negative test.

Sportsbeat has appointed SJA member Rachel Steinberg as their new women’s sports editor. Steinberg joins from the Jewish Chronicle having previously worked at MailOnline and Metro.