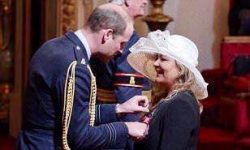 Mail on Sunday sports editor Alison Kervin received her OBE for services to sports journalism from the Duke of Cambridge at Buckingham Palace last week. It was a day to remember.

The day at the palace was far warmer and more relaxed than I imagined it would be. Full of big hats, sun-dappled court-yards, marching soldiers and wide staircases, of course. But also full of people smiling and reassuring you that, despite the very real fear deep inside you that you might mis-time a curtesy and go flying head-first into the Duke of Cambridge, that was unlikely to happen.

I was with Victoria Beckham for my investiture. She’s a tiny, alarmingly delicate-looking woman who seemed far sweeter and more insecure than her towering public image would have us believe.

We discussed the art of curtseying, only to be interrupted by Mark Rylance (at the palace to be knighted). He said that we had nothing to worry about. If he moved his head an inch to the left or right, he’d lose his ear.

The most impressive part of the day was the chat with Prince William. It’s easy to be dismissive of these events, and I have friends who have turned down honours because of their anti-monarchist feelings. I respect that stand completely.

But even if you dislike the institution you can be impressed by individuals within it, and he was astonishingly engaging and well-informed – asking me about the Mail on Sunday’s concussion campaign and our Russian drugs investigation four years ago.

He named two of my novels and talked extensively about the Lions tour. He’d read the newspaper the previous week and talked about stories in it. He said he always read sports sections – a sensible and decent thing to say. “It’s the bit of the paper I like best,” he added.

Since being awarded the OBE lots of people at work have come up to me and said how great they think it is that a working journalist has been honoured, and how positive that makes them feel about what we’re doing and about our much-maligned profession. I hope that’s the case.

I took my son, George, as one of my guests to the Palace and he found himself dressed up in a new suit and sitting just behind David Beckham. I thought he’d be delighted by this turn of events.

“What was he like?” I asked as we walked out of the palace gates afterwards.

“A bit oily looking,” he replied.