And don’t forget, the deadline for the British Sports Journalism Awards is January 20th – enter here.

The concerning trend of sports journalists being denied access to football matches, with clubs citing Covid rules, is continuing.

Tom Scargill, who covers Halifax Town for the Halifax Courier, and Leigh Curtis, who reports on Notts County for the Nottingham Post, are leading calls for new regulations guaranteeing the right of admission for sports reporters, claiming it is putting livelihoods at risk.

Scargill was denied access to Halifax’s recent away game at Weymouth, while Curtis was shut out of Notts County’s match at Dagenham and Redbridge. In both instances, limited availability of space was cited due to social distancing.

In addition, Dundee daily The Courier, the Perthshire Advertiser and the Kilmarnock Standard have all been denied press passes to attend Celtic matches this month, according to website Hold The Front Page.

Unfortunately I won’t be able to provide my usual coverage of tomorrow’s Kilmarnock game as I’ve been denied press access by Celtic. Something similar happened with Perth-based media last week. Coupled with the fact Killie fans won’t be able to watch it, it’s very disappointing.

Shooble signs for The Athletic

Congratulations to Ahmed Shooble, who has joined the team at The Athletic. Ahmed was the beneficiary of last year’s SJA Diversity in Journalism bursary, which included fees for his year-long NCTJ Diploma in Journalism training with journalism school News Associates.

Two dozen English-language news publishers and publications have collected 100,000 or more digital-only subscriptions, according to new research by Press Gazette.

And leading the charge for sports journalism is number five on the list, The Athletic, with one million subscribers according to co-founders Adam Hansmann and Alex Mather. 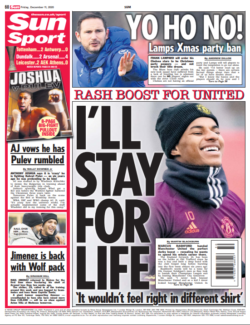 Marcus Rashford’s interview with Jim Rosenthal at the British Sports Awards made for headlines around the world.

The Manchester United striker was one of this year’s recipients of the Sport for Social Change Award.

And in his winner’s interview he delivered some newsworthy quotes that filled the following days back pages.

“For me, I never look beyond Manchester United,” Rashford told us.

“As a kid I never looked beyond Manchester United. In my mind it wouldn’t sit right for me to be pulling on another shirt. I just want to do my best for the club while I’m here. Long term hopefully.

“All the good things that have happened this year have come from Manchester United giving me an opportunity as a kid. I don’t just remember the last year or the last five years.”

If you missed the awards show, you can still watch it online below.