OLIVER BROWN, chief sports writer of The Telegraph, pays a personal tribute to his father, Adrian, who died on Boxing Day at the age of 83

It is difficult to overstate the degree to which my father loved newspapers. Whenever I would seek gently to persuade him that readers’ tastes were evolving, that the same articles could be consumed on an iPad or a mobile phone, his resistance became more entrenched. Print journalism, in his eyes, deserved to be appreciated at leisure and on the page. The eclectic spread of material at the breakfast table – The Guardian, Daily Mail and The Daily Telegraph – reflected how his choices were seldom guided by the editorial line. He simply adored the trade and all that it had given him.

Adrian Brown, or “AB” as so many of his colleagues knew him, died in the early hours on Boxing Day. He was 83, and he had devoted himself to the newspaper business for 56 years. From his young days as sports editor of the Lynn News, his hometown publication in west Norfolk, to night-editing The Daily Mirror’s back pages in the period when it was still selling five million copies, he pursued his craft with a passion that never wavered. It is no exaggeration to say he was as dedicated at 72 as he had been at 16.

Even when, long past conventional retirement age, his working week had dwindled to a mammoth Saturday shift at The Mail on Sunday, he would embark on the 130-mile trek from our house in Thornham at 4.45am to call via the butcher’s in King’s Lynn, making sure he had pork pies for everybody in the office at High Street Kensington. He would often describe the process of producing a newspaper from scratch as a miracle, and it was one in which he relished being centrally involved. 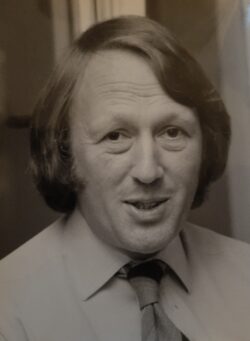 Dad was not a man of faith by any stretch, and yet he felt an almost spiritual kinship with the Fleet Street haunts he left behind. Often we would meet for lunch at Ye Olde Cheshire Cheese on Wine Office Court, where sawdust lay sprinkled over the floors and where WF Deedes had once held forth amid the ambient gloom of the snug bar. For his 80th birthday, we bought him tickets to the West End production, Ink, a play that thrilled him not just with its accurate evocation of the toil of late Sixties newsrooms, where the physical prefigured the digital, but because its central dramas, in particular the Mirror’s circulation wars with The Sun, were ones he had witnessed first-hand.

His path through a halcyon era of British journalism involved some novel detours. In 1957, aged 19 and restless to explore the world beyond, he set sail on the Queen Mary from Southampton to New York, ultimately finding work at a newspaper in Port Colborne, Ontario, on the shores of Lake Erie. From 1973 to 1976, he spent summers at the Los Angeles Times, strengthening a US connection that had begun in his youth, when he frequented the vast air base at Sculthorpe, Norfolk’s now-abandoned Little America, where pilots would unwind from their sorties over the Soviet Union by listening to the finest jazz.

Decades later, I took a road trip with Dad from Texas to California, ending up at the home of Chuck Garrity, former sports editor of the LA Times, where they merrily reminisced about their experiences working with Jim Murray, perhaps the greatest intro-writer of them all. Dad would never have claimed to hold a candle to Murray’s celebrity, and yet he was, in his own field, a quite brilliant journalist. His understanding of the rhythms of the English language was so subtle, he could cut needless verbiage down to its essence in a heartbeat.

Thank you to @collinspatk1 and the Mail on Sunday sports desk for this lovely recognition of Dad in today’s newspaper. He would have been thrilled pic.twitter.com/HA5hEvUWlp

It is an age-old truism in newspapers that writers take all the plaudits while everybody back on the desk makes them look good, but it was one with which he made peace at an early stage. Granted, he was none too impressed when one Mirror columnist failed to master the eight-hour time difference during the Los Angeles Olympics, or when, bombarded by the human horror of the Heysel disaster the following year, someone in the office had the temerity to ask where the match report was.

His was a hard-bitten time on Fleet Street, when the drinking could be prodigious and the smoking and swearing even more so, but it has been wonderful to read in recent days the tributes to his kindness and warmth. In this department, much credit goes to my mother, Sheila, whom he met at the BBC while working on the 1970 World Cup, and who always knew how best to curb his irascible excesses. That said, Dad did have a natural gift for encouraging anybody who hoped to follow the same path. He took much pleasure, for example, in advising Charlie Wyett, a fellow Thornham-ite no less, throughout his journey from local newspapers to his role today as football editor of The Sun.

As for my own career, his support was, at every stage, a source of the deepest comfort. Dad was not a puller of strings, in the way that many assume that family ties in journalism work. He did not have any preconceived notions that I would become a journalist at all. He simply inhabited a world with which I grew smitten. Once I finally fulfilled the dream of writing for a living, he could scarcely have been happier. For every article I had in the newspaper, he would send a mid-morning email, full of his observations on composition, layout, typography, you name it. Usually, his takes were generous to a fault. Every so often, there would be a constructive criticism. “Alliteration is a wonderful tool,” he said, after I had crowbarred too many identical consonant sounds into the same sentence. “But it can sometimes be overused.” He was, of course, absolutely right.

I will miss those emails more than I can say, just as I will miss his requests for my flight numbers so that he could track me over the oceans. I will miss every instance where he went above and beyond in the name of paternal solidarity. There was one occasion, five years ago, where I had broken my shoulder and shattered my wrist but still insisted on keeping an interview appointment with Judy Murray. Sure enough, he accompanied me on the train to make sure my plaster cast would not be bumped. To have received such love is one of life’s priceless gifts. And in whatever else I am able to accomplish professionally, it is a gift that I will carry with me.