Mention the history of Portsmouth FC and those of a certain age will pontificate nostalgically about the club’s glory days just before and after the second world war.

Manager Jack Tinn’s lucky spats, worn for the 1939 FA Cup triumph over Wolves, will come up while the glorious deeds of Dickinson, Gunter and Harris in 1949 and 1950 title triumphs will inevitably be mentioned too.

Since then glory has been limited to Harry Redknapp’s 2008 FA Cup success as Portsmouth tumbled down the football ladder into financial ruin.

Pompey and circumstance ended in a visit to the Football League’s lowest division while the legacy of several flamboyant owners with unclear motives continued to bite. With £58million debts in February 2012 Pompey entered administration for the second time in 14 months, suffering three relegations in four years. They parted with a raft of players, made staff redundant and survived. Just.

Against this background award-winning journalist Neil Allen set out to catalogue the 2019-20 season which involved more ups and downs than a snakes and ladders board. Given unparalleled access, the Portsmouth News reporter embarked on a series of interviews with key club figures which tell of Portsmouth’s season and their recent chequered history.

He has produced a blockbuster of a book running to more than 500 pages on the season where manager Kenny Jackett’s team suffered a second play-off semi-final defeat. It will be essential reading for Pompey fans. 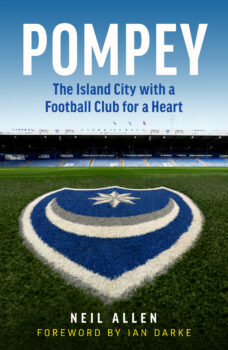 Naturally the tangled financial affairs feature because they still inhibit the club to this day. Chief executive Mark Catlin, for example, confided to Allen that Portsmouth lost nearly £1million a month during the Covid-interrupted season. Season ticket refunds would probably cost another £1million.

Former West Ham supporter Catlin sold vinyl albums and videos from a Romford market stall before shaping a Spanish telecommunications company and then being catapulted into the chief executive seat when fans established ownership of Portsmouth in April 2013.

Seven years later he remains at the helm but confessed: “This was my toughest season in football.”

Away from all the financial turmoil, Allen includes a remarkably frank interview with club legend Alan Knight who made 801 appearances in goal and later became goalkeeping coach. Knight is amazingly honest about his descent into alcoholism to the point where he considered obtaining a hosepipe to help him commit suicide in his car.

Fortunately he pulled himself together and now works as a club ambassador.

With another Covid wave again causing widespread postponements, the future for Portsmouth and many lower league clubs remains unclear. Certainly they are taking nothing for granted. “Just being Pompey doesn’t win you any game. You still have to compete” added Catlin.

Pompey’s stubborn resistance to crisis has already averted disaster.  Now those qualities seem certain to be tested once more.

“Pompey, the Island City with a football club for a heart” by Neil Allen is published by Icon Books price £19.99.