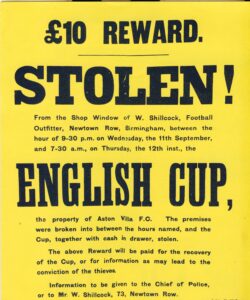 This weekend Arsenal began their FA Cup defence against Newcastle United, but 125 seasons ago, the Cup holders managed to lose the trophy before so much as kicking a ball.

In 1895, Aston Villa won the Cup for the first time. They beat West Bromwich Albion at Crystal Palace and the winning goal came after only 30 seconds.

“If Villa’s goal was dramatic it was nothing to the sensation that was to follow later.On the night of 11th September it was stolen from a shop window,” wrote Geoffrey Green of The Times in his ‘Official FA Cup History’, published in the late 1940s.

In September 1895, the Birmingham Post had reported how William Shillcock ‘a well known follower of sport in the city and a boot and shoe manufacturer’ applied for permission to display it in his shop and offered a bond of £200. It was known as the ‘little tin idol’ and was completely different in appearance to the present trophy.

Perhaps inevitably, ‘the emblem of victory found its way into the hands of the enterprising burglar’ said reports.
A few days later, The Athletic News, then a renowned sports newspaper observed: “Someone has tried a hitherto untried method of lifting the cup without the aid of a team of expensive footballers.” 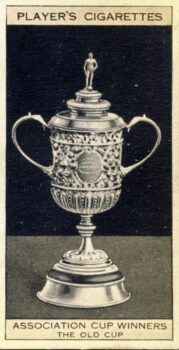 The Birmingham Post offered a more sober report and gave details on how the gang had climbed onto the roof and forced an entry.

“Beyond the theft of the Cup and some few shillings taken from the cash drawer nothing else has been missed from the premises,” they reported.

There were no banner headlines, but the story was related in some detail, albeit sandwiched between a new church for Balsall Heath (now an area in the Balti Triangle) and reports from the Birmingham Police court. In the dock was a man selling hired furniture and others were prosecuted for throwing stones at trains.

“The object of the robbery seems somewhat obscure, as apart from the historic value of the cup, the silver when melted down would be worth not more than £5 in the present state of the silver market,” said the paper.

The Globe, published in London, suggested that ‘the Birmingham football community is in a state of panic.’

The original trophy was never seen again, although it was possible to make a replacement because Wolves had presented their players with miniature replicas in 1893.

Thereafter, the story became a legend, to be revived by The Athletic News on an almost annual basis in their FA Cup previews.

Police investigations however made no further progress but then in 1958 the Sunday Pictorial, tagline ‘the newspaper for the young at heart’, carried the sensational and exclusive confession of octogenarian Harry Burge.

“I am an old man now and want to get the thing off my mind, it has troubled my conscience for a long time,” he told reporter Tom Driscoll.

“It was just turned midnight when the three of us forced a lock on the door at the back of the building with a jemmy.”

Burge related how he snatched the cup while his accomplices took several pairs of boots. They claimed the trophy was melted down to make ‘snide half crowns’ (worth 12 ½ pence in today’s money.) These were passed in The Salutation, a pub often visited by Villa players.

“Some of them may have handled the dud coins not knowing the silver came from their cup,” adde Burge.

The morning after these revelations, a staff reporter on the Birmingham Post recorded solemnly “A CID officer told me last night we will have to look into this confession.”

Although ‘an arrest was still possible’ it seemed unlikely that evidence could be found. Fingerprints were not used in Birmingham until 1906 and police records were sketchy. 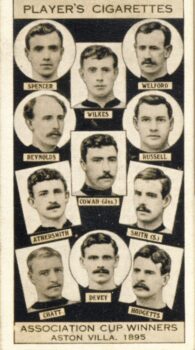 It emerged that Burge was a habitual criminal even in old age, but the Post described him only as ‘The man’ as it began to knock the Pictorial exclusive.

“The enquiries will doubtless reveal discrepancies between the man’s story and the contemporary accounts in the Birmingham Post,” it sniffed.

Villa chairman Chris Buckley said: “there is a farmhouse in Walsall Road, Perry Barr where the cup may have been melted down. I have been to see it. “

The story remains inconclusive but nothing fascinates like an honest to good mystery. In 1995, The Independent devoted a full page to mark 100 years since the original theft, and in 2010 the Birmingham Mail’s website asked. “Did this pensioner steal the FA Cup?

It is a crime perhaps rivalled only by the 1963 Great Train Robbery for legendary status. They made a movie about that. Now there’s an idea …