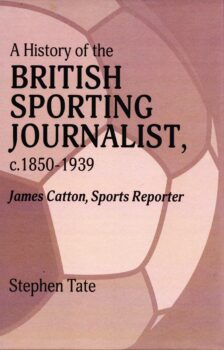 Long before The Athletic, there was the ‘Athletic News’, essential reading for sports fans on either side of the first world war.

The editor was James Alfred Henry Catton, considered a pioneer in the world of sports journalism and his career forms the backbone of ‘A History of the British Sporting Journalist’, the fruition of many years research for a doctoral thesis by journalist turned academic historian Stephen Tate, it tells the story of the formative years of our industry.

Catton may have been a giant in terms of achievement, but physically he was not a tall man. The young Neville Cardus, a cricket writer with what was then the Manchester Guardian, penned a memorable description.

He wrote: “Incredibly small in height, red in the face, round as a ball, gold spectacles, white moustache, bald head at the front, twinkling eyes, he was as though born from Bacchus out of Mr Pickwick.”

Another colleague wrote fondly of “my guide philosopher and friend (pocket edition).”

Catton took a while to learn, Tate notes that in an early match report, he did not give the result until the 41st line.
Much later, when editor of the Athletic News, Catton instructed his reporters to say “what happened, how it happened and why it happened.”

Catton wrote as ‘Tityrus’, Virgil’s shepherd in ancient Greek literature.  Anonymity was common among correspondents, with bylines including ‘The Veteran’, ‘Roman’ and ‘Wandering Wolf’. Even ‘Nemo’ found a place. After all, years later, even the great Geoffrey Green was still identified in The Times only as ‘Association Football correspondent’.

Even in the 18th century, sport had appeared in daily newspapers, and publications such as Bell’s Life included reports in the early 1800s but coverage was often sporadic. It wasn’t until much later that matters improved.

In 1884 William Fairhurst launched the ‘Football Field and Sports Telegram’ in Bolton.

This publication cost a penny and Fairhurst wrote under the pen name ‘Olympian’, a decade before the Olympic Games were revived. In 1905, William Pickford’s four volume football compendium recalled the tribulations of reporting before telephones.

Cyclists had to ride hard with the copy often covering 12 miles through the busy London streets to Fleet Street. Even Pickford had limitations.

“One day, being dissatisfied with a referee’s decision, I went to Mr Fairhurst the sub-editor and asked him. Evidently he did not know what offside was for he referred me to the football annual. I am afraid I found it rather difficult to understand.”

Sports writer Alf Martin, president of the National Union of Journalists in 1917, found it surprising ‘that more reporters do not cultivate a knowledge of sport.’ It is a complaint recognised by many in newsrooms to this day.

By 1894, telephones were being used more and more. The weekly ‘Scottish Referee’ marvelled that “the greatest advancement of the present day was the purchasing of an evening news not 100 yards from the field and before the spectators had left with a full account of the match and comments on the same. In days gone by the citizens could only have got an account of the doings at least three days afterwards.”

In 1902, Catton was at Ibrox when 25 died after a stand collapsed during the Scotland v England match.

“The magnitude of the disaster could not be grasped in the press box at the time,” he wrote. “Although I shall never forget seeing unconscious people, borne on the shoulders of strong men across the ground to the pavilion where the players had their accommodation.”

Tate reconstructs how Catton climbed into the stand which had collapsed to establish accurate details.

He was so highly regarded that when he eventually retired, the sporting world organised a testimonial fund. A presentation was made before a match at Goodison Park where he received a cheque, an inscribed barometer and a gold watch for his wife.

He continued to keep records for Wisden up to his death in 1936. “He was steeped in cricket lore” noted the Almanack.

A journalist never normally reveals sources but in this case an extensive bibliography and over 40 pages of references are welcome tools in a real heavyweight volume.

It is a shame that there are no illustrations and some will be put off by the publishers price tag of £67.99 (it is available online at a slightly reduced price).

That is a pity because this is a fascinating evocation of a lost era of sports reporting.