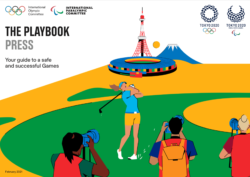 Journalists were given a glimpse of restrictions for this summer’s Olympics and Paralympics in a briefing for the world’s media today.

IOC press operations boss Lucia Montanarella joined forces with colleagues from Tokyo 2020 organisers to deliver a Q&A webinar to representatives from accredited media around the world.

The IOC’s first ‘Playbook’ for press – download here – was released last week, though it was clear much detail was still to be worked out, with the second edition due in April.

Organisers have promised not to cut the number of accreditations available for the Games, although working spaces in venues for reporters and photographers have been slashed by 50% to accommodate social distancing.

The British Olympic Association has begun contacting those with credentials, asking them to confirm their intention to travel by February 19.

Organisers have confirmed there is no plan to ask media to quarantine on arrival in Tokyo, though they will be subject to 14 days of ‘enhanced measures’ and all accredited media will have to install Japan’s test and trace app on their phones.

“It is not a quarantine,” said IOC operations director Pierre Ducroy. “It’s simply a way to monitor the activities that you will be doing in that window, that they are strictly focused on your professional duties.”

On an IOC call to Tokyo. The more we learn about these new Olympic/Paralympic Playbook rules, the more we realise they’re simply unworkable for stakeholders. So much is vague at this stage. So much is being put back to April. So many Covid-19 rules will be unwittingly broken

Journalists will require to take a Covid test before departure – at their own expense – and on arrival in the Olympic capital. They could also be randomly tested throughout the Games.

In the event of a positive test media could be quarantined in a hospital or government facility, rather than their hotel.

“Upon entry to Japan, under domestic rules, necessary tests have to be conducted, and if they are necessary the Japanese authorities will look after the cost,” said Tokyo 2020 Games delivery officer Hide Nakamura.

“Anything additional, that will be something that we will have to consult over but the test 72-hours before your coming into to Japan – that test is something you will have to cover the cost of.”

Media have also been told not to use public transport or eat in restaurants, which will present major problems for those staying outside the official accommodation network. The IOC said they’d feedback on this problem in April.

In addition visiting gyms, tourist areas or bars will be banned, though or run or walk will be allowed, providing it is ‘not in a crowded area’.

Ticketing will now be in place for all sessions and all sports, previously something that was restricted to the opening and closing ceremonies and over-subscribed events such as swimming and basketball finals.

Media will now be expected to apply for access to events in advance online, with the IOC currently working on an ‘accreditation hierarchy’, which could present a problem for freelances, smaller organisations and non-rights holders.

Mixed zones will remain open but capacity will be significantly reduced, while organisers warned opportunities for non-rights holding broadcasters are expected to be reduced.