Maybe the era of the Saturday sports edition really is at an end in our digital age. ANTON RIPPON reports on an attempted revival on the south coast that has failed to shift enough copies 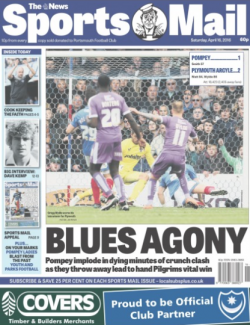 In 2013, sportsjournalists.co.uk reported some good news.  A year earlier, The News, Portsmouth, had closed down its weekly Sports Mail. But 10 months later, after an “outpouring of emotion” from readers, the paper returned, and so became one of the last survivors of that once-wonderful institution – the Saturday night Green ’Un, or Pink ’Un, or whatever colour happened to be in vogue in your neck of the regional woods.

Supporters of cash-strapped Portsmouth FC were particularly pleased since the News had come up with what was seen at the time as a catchy marketing idea: promising to donate 10p from every sale to the Pompey Supporters’ Trust.

There was a warning, though. The paper’s website told supporters: “We are asking all fans of the paper to go out and purchase copies on a weekly basis to ensure it can remain an important part of our area’s sporting scene. Without your support the future of the Sports Mail will be put back at risk.”

It appears that not enough fans took heed. Last weekend, revealing that the publication is currently averaging fewer than 3,000 readers every week, The News warned that its revived sports edition could close again if it doesn’t attract more readers. At the time of its original demise, the paper was averaging 3,700 every week, almost 1,000 more than the 2,792 it currently records.

An appeal in Saturday’s edition of Sports Mail said: “Developments in technology and the ability to receive instant information, rather than wait until 5pm to painstakingly study that day’s results have transformed the landscape.

“Unless the Sports Mail can pull in more regular readers – the clock is ticking down on one of the remaining two Saturday sports papers in this country.

“Unless more fans can commit themselves to heading out to pick up a copy every week, then come Saturday, May 7, when Northampton visit Fratton Park, it could be the final whistle for a sports paper which first saw light in 1903. It’s not what we want. And it’s not what Pompey wants.”