People change their houses, their cars, their jobs, sometimes even their spouses, but they never change their football team. ANTON RIPPON reviews Savage Enthusiam: A History of Football Fans.

Why would you want to be a football fan? Why would you expose yourself to all those roller-coaster rides of great moments, abject despair – but, for most, mediocre seasons when your club neither threatened to win trophies, nor worried supporters that it might go down a division?

It seems as it if was ever thus: in October 1898, a Derby County fan wrote to the Derby Mercury asking the newspaper to explain the word “supporter”.

“Now that the football team are doing rather badly,” wrote the fan – the Rams had already endured a poor start to the season and would go on to win only one of their first 11 matches – “many so-called supporters are ever ready at any and every opportunity to scoff instead of encouraging them and giving them credit for any good work they perform … I quite understand that it is disappointing to have the same poor results every week but some team must win matches that team cannot always be our own.” 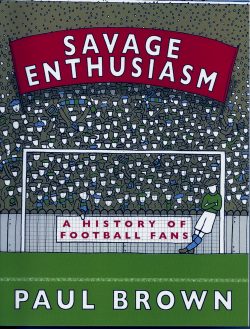 The fan called upon fellow Derby County followers “to stick to their team and support it”, and they would surely soon see some improvement. “In conclusion,” they wrote, “I must say that a most fitting time for a restoration in public favour would be against the Villa on Saturday, whom I would very much like to be humbled.”

As it turned out the Rams were thrashed 7-1 at Villa Park. I came across this nugget courtesy of a splendid new book by that always exemplary researcher, especially of the Victorian game, Paul Brown.

Savage Enthusiasm: A History of Football Fans traces the evolution of the football supporter from the sport’s earliest origins right up to the present day. It explores how football became the world’s most popular spectator sport, and why it became the undisputed sport of the people.

Brown says: “Being a football fan is both a privilege and a burden. When you are winning it is the best thing on Earth, and when you’re not, then it’s the worst thing in the world. The thing about a football fan is, whichever way fortune swings, you are stuck with the game and with your team for life.”

The book begins with an account of the annual Shrovetide match at Derby – according to some, but not all, origin of the expression “a local derby” – between the parishes of All Saints’ and St Peter’s, a rare treat that Derbeians looked forward to like little else in their lives, a celebration but also a brief release from hard lives and from boredom.

Since at least the medieval period it was a chance to come together with family and friends, as a community away from the constraints of work. Shrovetide was associated with eating pancakes, cockfighting – and football.

By Shrove Tuesday, Derby was ready to enjoy itself. “At two o-clock begins the sport,” read one account, “and as the hour approaches the whole town seems alive with expectation.” A bit like the Forest game, by the sound of it. So how did that grow into what we have today?

‘Savage Enthusiasm is a social history, a political history, and a history of the game itself. Primarily, though, it is a history of people going to watch their teams win or lose, then going back again – and again’

While attempting to answer that the author travels many a mile: the “howling roughs” of the 19th century and the hooliganism that plagued the 1980s, a decade that included the fan disasters of Heysel, Hillsborough and Bradford; the boom in newspaper coverage of football, and the later television coverage that gave birth to the armchair fan; wartime football; cup finals and internationals; modern supporters railing against what they see as the abuse of their clubs by some owners.

Savage Enthusiasm is a social history, a political history, and a history of the game itself. Primarily, though, it is a history of people going to watch their teams win or lose, then going back again – and again.

It is a celebration of watching football, a cracking book dedicated to anyone who has ever had their heart gladdened or saddened by this wonderful, infuriating game.

Savage Enthusiasm: A History of Football Fans by Paul Brown (paperback, £12.99) is published by Goal Post and is available from www.goalpostbooks.co.uk