Peter was one of those people who always gave you a warm welcome whenever you arrived in a press room anywhere in the world.   He was the same with the players and officials and it was no surprise that many visited him at home during his year battling against cancer.

It was also fitting that after a packed congregation said their goodbyes to Peter, that the music he had chosen for the occasion was the Morecambe and Wise classic song Bring Me Sunshine.  The words were printed on the back of the order of service and the congregation were encouraged to join in.

His love of hockey came from school, but by his own admission he was not a great player, so he eventually turned to umpiring.  As his distinguished career in the police was coming to an end he turned to journalism.  He started by writing an umpiring column for Hockey Sport, who were also looking for photographs for the feature, so he took his own camera along.

That’s when he developed his love affair for sports photography and over the years he became one of the best hockey photographers in the business.  His passion for the sport took him all over the world to Hockey World Cups, European championships and Champions Trophy tournaments. 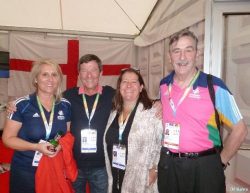 The undoubted highlight of his career was getting a photographer’s accreditation to the London 2012 Olympics, which only came to him, ironically, after the demise of the News of the World.

He also started the podcast Talk Hockey Radio and shortly before his death in early 2017 he donated his collection of audio recordings to the Hockey Museum.  The collection forms part of the oral history project at the Museum, which was named after Peter.

Peter said of the occasion: “For much of the 30 years I wondered whether anyone had noticed or even cared about my contribution to hockey.  So I got a special thrill when the Hockey Museum dedicated its oral history collection to me.”

He held administrative posts in the Sports Journalist’s Association, the International Sports Press Association and was a former chairman of the Hockey Writer’s Club, and he served a valuable role on the committee until he became too unwell to attend meetings.