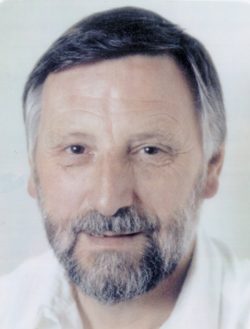 One of the finest sports and news photographers of his generation, Blackbrow (right) worked for the Mail for 37 years travelling to the world’s hot spots and major sporting events, including several Olympic Games.

In 1990 he earned the ultimate accolade from Daily Mail editor Paul Dacre, who described the iconic picture of snooker superstars Steve Davis and Stephen Hendry in the Dubai desert as a “masterpiece of its genre”.

It was just one of many pictures taken in close collaboration with the late, legendary Ian Wooldridge – the first SJA sports writer of the year – and Dacre would not have known the snooker balls were stuck to the wonky snooker table with chewing gum.

Earlier this year Blackbrow had his amazing photography published in a book, What a Life! 50 Years of Fleet Street Photography.  Mail colleague and former chief reporter DAVID WILLIAMS provided this forward.

You always knew where you were with Ted Blackbrow.  Straight talking, hard-working, fun to be with and crucially, one of Fleet Street’s finest photographers.

Not bad for a boy whose headmaster in London’s East End thought Ted would make a good dustman when he forced him to leave grammar school as a 15 year-old.

‘What a Life’ is an apt title for Ted’s incredible subsequent journey of more than five decades that began with a borrowed camera photographing his beloved Leyton Orient and ended with him so brilliantly capturing sporting history at the Olympics and World Cup – and the award of Sports Photographer of the Year. 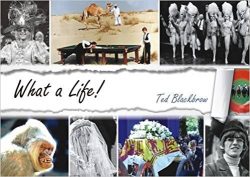 Along the way he sat down with Royalty, chronicled Reagan’s fraught meetings with Gorbachev – just two of the world leaders he photographed – illustrated the highs and lows of sporting superstars as well as guiding us in pictures through the Swinging Sixties and beyond.

At heart an accomplished and brave news man, he also had a rare ability to take the stars beyond their comfort zones persuading Steve Davis and Stephen Henry to play snooker in the sweltering Dubai desert while one of his most extraordinary journeys involved taking Sean Connery through East Berlin at the height of the Cold War, even giving the secret police the slip long enough to take his pictures.

His exclusive picture of disgraced Olympic sprint champion Ben Johnson his eyes bulging beneath the Olympic Rings in Seoul was used on the front of the Mail when the scandal broke while another exclusive of the Canadian being escorted by heavies through the airport dominated the back page.

It is the stories and anecdotes behind these pictures that provide a fascinating insight into a top photographer’s life on the road and Ted’s unrivalled ability to see or engineer opportunities for exclusive, unique, prized photographs that would distinguish many a front or back page.

The volume and variety of work in this book showcase not only Ted’s talent but his all-round ability.  Once when a ‘society’ photographer hearing Ted was from Fleet Street condescendingly described him as a “jack of all trades”, he retorted: “If that means I can do everything you do, and more, then yes I am.”  It was the way it was with Fleet Street’s finest.