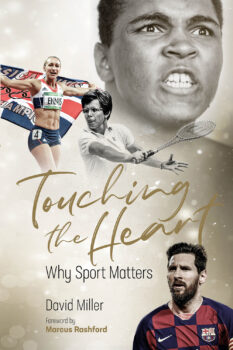 DAVID MILLER, former chief sports correspondent of The Express and subsequently The Times, has chosen his 50 biggest sporting names for a book which will benefit the Starlight Foundation, a charity which helps seriously ill children.

Touching the Heart is reviewed by PHILIP BARKER, SJA secretary.

David Miller has drawn on a sports writing career of more than 60 years in Fleet Street and his selections are included in a book which explores why sport is important.

Manchester United and England striker Marcus Rashford has written the foreword in which he reflected on his own experience.

“The ball provided a way out of difficulty, not just for me but for my family. Football offers a sense of belonging. For me football is the common language we all can speak,” he writes.

Although Miller met many of the individuals involved, he does not claim to have seen them all. He has therefore cast back into the archives to feature African American boxer Jack Johnson, who overcame fierce discrimination in the United States to become heavyweight champion of the world before the first world war.

Johnson’s  story is a timely inclusion in 2021. A controversial and exuberant figure away from the ring, Johnson opened the supper club which eventually became the Cotton Club in New York.

Miller describes him  as a “spontaneous exhibitionist” and he takes his place alongside kindred spirits such as George Best and Alex Higgins.

Jesse Owens and Muhammad Ali also feature as “sport is above race creed politics and geography”.

From Fanny Blankers-Koen to Jessica Ennis-Hill, women are well represented. This was not always the case in the early years of the Olympics.

Thus Sir Stanley Matthews sits alongside Lionel Messi in this pantheon of the great. The author saw both of them play, lucky man! Matthews gave his name to one of the most famous FA Cup Finals. Miller saw 63 of them in his  own career as well as 14 World Cups and 24 Olympic Games.

All profits and royalties from the book will go to the Starlight Foundation which “uses the power of play to make the experience of illness and treatment better for children and their families and create a sense of escape from the difficult reality in which these children find themselves.”