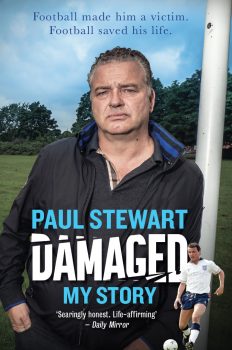 Paul Stewart’s life story should have been a rumbustious tale of happiness, glory and triumph.

The hometown hero’s record cash move, starring in an FA Cup Final and winning international recognition, all peppered with hilarious recollections about his time as room-mate of football’s greatest prankster.

You will find details of the big-money moves that took Stewart to Tottenham and Liverpool in the striker’s autobiography. You will find his take on the Spurs v Nottingham Forest 1991 FA Cup final which man of the match Stewart dictated and you will find some of the crazy stunts pulled off by Paul Gascoigne all within the pages of Damaged.

But that title provides the clue. Stewart’s life story unfolds beneath a dark cloud of abuse that completely overshadows everything else. His England caps, his Wembley triumph, his boast of being one of the few who has played in a Manchester, Merseyside, north London and north-east derby all fade into the background against his claim of being sexually abused by a junior coach almost daily between the ages of 11 and 15.

Stewart fell into the evil clutches of the coach while setting out on the road to becoming one of the best-known English footballers during the late 1980s and 1990s. The coach carried out assaults in his car, on football tours and even in Stewart’s home after weaselling his way into the family circle.

He completely fooled Stewart’s parents with his offers of extra football tuition, free gifts of football kit, visits to the fair and takeaway meals. They invited him to stay nights at their house where Paul would inevitably be assaulted again.

Some of Stewart’s manuscript fits the “you couldn’t make it up” category. He even made an appearance on the TV programme Jim’ll Fix It, introduced by notorious paedophile Jimmy Savile.

Stewart kept the horrors of his ordeal locked away inside but there were clues. Yet his parents failed to realise the depth of his problems when he refused to speak for a whole year.

He claims the experiences shaped his whole life, leading to serious drinking bouts, drug binges and suicidal thoughts. It wasn’t until November 2016 that Stewart read a Daily Mirror article on a footballer who had been abused and decided it was time to release his burden.

Stewart succumbed to ecstasy while at Spurs and soon graduated to cocaine, developing a habit costing between £300 and £500 a week. He’d draw it up his nose through a straw in a back alley behind a pub at 3.0am

At the age of 52 he tearfully broke a silence lasting more than 40 years. The autobiography reveals his desolation and isolation growing up with regular abuse he believes was responsible for his descent into a seedy underworld of drink and drugs.

Stewart succumbed to ecstasy while at Spurs and soon graduated to cocaine, developing a habit costing between £300 and £500 a week. He’d draw it up his nose through a straw in a back alley behind a pub at 3.0am.

One of his clandestine episodes was interrupted by two policemen who failed to realise what was happening.  His luck held when his name never came out of the hat for drug testing at Spurs and when he signed for Liverpool they didn’t bother with a drug test before completing a £2.5 million deal.

A drink-and-drug-ravaged Stewart scored once in 32 games for them over four years.

Author Jeremy Armstrong was the Daily Mirror journalist who broke Stewart’s story. He has captured the agony and heartbreak behind one of football’s darkest life stories.

It’s not an easy read but it was a masterstroke to include chapters by Stewart’s parents , long suffering wife Bev and three children, who movingly describe their attempts at coming to terms with his confession.