VIEW FROM THE PRESS BOX: A commission to write six articles about a sport that she loved seemed an ideal freelance job for SARAH JUGGINS. But after politely declining to accept overshoes in lieu of payment, she decided she needed to air her views on editors or publishers with no honour 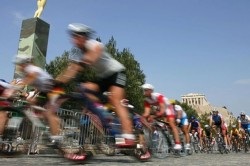 This article is difficult to write because it hints at an element of failure: failure on my part to be a competent freelancer and failure on the part of our industry to run a fair and honest profession. At this point, I must hold my hands up and state that I am by no means lumping all editors into the same category and, as a former magazine editor who always looked after my writers, I know that editors with integrity are the very large majority but this article does highlight the worst of the breed.

It all began when I accepted a rather vague commission from the then editor of Cycling World, Colin Woolley, to write six articles for his magazine. We had a quick chat over the telephone and agreed a price, a deadline and some general topics and that was it. I had a bulk of work to do writing all about one of my favourite sporting activities.

I wrote the articles over the space of about three weeks. The work involved a number of telephone interviews, some research, a trip to the nearest town to get some photographs of bicycles secured with varying degrees of security, and the cost of two cups of coffee while talking to a teacher about a cycling scheme at his school. All in all, a really pleasant assignment, an interesting range of topics, 1,000 words per article.

My first article was published very quickly in the magazine and I was pleased to have broken some new ground. I invoiced Cycling World for the full amount.

It was then that I received an email from a new editor, David Robert, saying that the articles would be paid for as and when they were published. In the meantime, David asked, would I be interested in writing more articles?

That all sounded reasonable. Payment on publication is common, and David was keen for me to do more work.

But that was the summer of last year and I am still waiting for a single penny from Cycling World.

The first excuse was that there was a new finance officer who was still finding his or her feet. Then I received a testy reply from Colin, who was very annoyed that I was continually asking to be paid for the work I had carried out at his request. I was offered a free pair of overshoes and a holiday in Barcelona but, as I explained to an increasingly embarrassed and apologetic David, my bank manager was unlikely to accept these items as payment for my mortgage, so it was not really in my interests to do so either.

So failure all round. As a freelancer, it is all well and good gaining commissions and doing the work, but you also have to tap into the business side of things. Contracts, written agreements, part-payments – anything to make you just that little more financially secure. It is absolutely no use setting yourself up as a self-employed journalist and forgetting the main reason you are working.

Then there is the naivety. I spoke briefly to Colin on the phone and decided I liked the sound of his voice and the slightly “laid-back” attitude he took towards forward planning. Looking back, who has ever heard of any editor worth his salt contacting a journalist and not having the remotest idea what would be on his forward features list?

“Just write six articles on anything you like,” is not necessarily the most business-like of commissions.

The SJA contacted Cycling World to ask about its payment policy, and editor Robert said, “Colin Woolley, who commissioned the pieces, was then and still is the publisher. I have resubmitted Sarah’s invoices to Mr Woolley on eight occasions and stressed the importance of them being paid.”

From an industry point of view, the failure is in the process. This is the second time I have been stung in this way. A year previously I was involved in writing for the short-lived Women In Sport magazine. Again, I took the owner’s word on trust and wrote several articles for the first two issues.

Along with the editor and the designer, who both invested a huge amount of time and energy into the venture, I remain out of pocket by a large amount. But what could any of us do? We all tried to go through the small claims court, but it cost us money and a simple plea of “bankrupt” on the part of the magazine’s owner means we will never get redress. I would like to think it is an area in which a body such as the SJA could help out but, aside from “naming and shaming” and banning these people from joining the SJA, I don’t know what else can be done.

The problem lies in a freelancer’s position at the bottom of the food chain. If someone decides they are not going to pay for our work, that is it. To chase that payment costs time and money, and can often lead to the commissioning editor suggesting that you might not be invited to undertake more work for them in future.

One of my colleagues on the SJA committee tells of how they once landed what they thought would be a plum job editing a sports title for one of the country’s biggest magazine groups. On arrival, they started ringing round some colleagues on Fleet Street papers or working in broadcasting to ask if they would be interested in working for the magazine. Most declined, grumbling about low rates of pay from the title, or even unpaid fees.

When the new editor was handed their first monthly accounts spreadsheet, they saw that there was around £10,000 in accumulated freelance fees that had gone unpaid. He asked his publisher what was happening. “That 10 grand is more valuable to us in our bank account than it would be in a load of freelancers’ accounts,” the publisher said, adding, “Besides, they’ll wait for payment because they all want to work for us again.”

It is not all doom and gloom. As I am writing this, I have just returned from a free trip to France, where I spent a week “road testing” a holiday let. I am lucky enough to jet all over the world following international hockey tournaments, all at the expense of someone else. When I am not doing that, I work from my kitchen and my office colleague is a small Jack Russell – the only office politics revolve around what time he gets a walk.

But, like every other job, there are positives and negatives – a freelancer’s biggest worry is falling victim to one of a small number of cynical people in our industry who fail to honour their promise.