What a difference a week makes in our crazy, intoxicating world of newspapers, says NORMAN GILLER, as he laments the death of a brave reporter, and wonders what scoops will be in a new Sunday paper

This time last week I was reporting on the blanket of gloom hanging over Wapping, and today you can burn your hands on the energy and excitement emanating from Rupert Murdoch’s print empire.

That euphoria was doused in the worst possible way on Wednesday with the news of the death in Syria of Marie Colvin, the Sunday Times war correspondent.

Journalists and journalism have taken a terrible shellacking recently, with tales of the unacceptable emerging during  the Leveson Inquiry into our profession. This has led to us all being “contaminated”, accused of having unethical standards and content to allow headlines to become headlies.

It has taken the tragic loss of one of our good and great to bring a little balance back into the assessment of newspapers.

There are many among us who are conscientious and caring about what we write and report, and most journalists I know try to follow the code of being factual and accurate at all times.

Marie Colvin was a reporter of enormous integrity, courage and compassion, who captured the horrors of war in the hope that her words might help make the world a saner and more peaceful place.

Hers is the beacon light all journalists should follow, writing and reporting truthfully regardless of any pressures to bend the facts to produce a cheap headline.

Here’s an idea for the latest creation about to run off the Wapping presses. In Marie Colvin’s memory, include a line under the Sun on Sunday masthead that reads simply, “The Truth and Nothing but the Truth”.

I won’t be holding my breath, though.

The Sun rises on Sunday

Along with all her colleagues, Rupert Murdoch was devastated by the death of Colvin during the shelling of Homs. There will be suitable mourning, but true-pro Marie would have been the first to insist that the newspaper must get to press. It is our raison d’etre.

There was a well-founded fear at Wapping that, at the behest of his multi-million dollar corporate America investors, Roop was going to kill off The Sun just as he did the News of the World last summer. We all know that the tabloids are, or were, the cash cows that keep alive the uneconomical heavyweights, The Times and Sunday Times.

Then came the Murdoch masterstroke to go ahead with the launch of the Sun on Sunday, something we have been telling you about here at the online home of the SJA since the demise of the NoW.

Based on a seven-day staffing operation, dummies for the new Sunday had been in place for weeks, and so Roop felt confident in going for an instant lift-off to spike the Mail‘s plans to bring out a spoiler.

Murdoch’s decision to launch will also surely impact the likes of the Sunday Mirror, People and the Star on Sunday. According to their January circulation figures, in the absence of the News of the World they have been enjoying massive year-on-year hikes in circulation of 60.43 per cent (or around 700,000 extra sales each week for the Mirror), 53.89 per cent and 103.59 per cent respectively.

Sport is going to play a huge role in the Sun on Sunday, and it is good odds that they will splash this weekend – just days before the next England international – with a Harry Redknapp story, given their close relationship with the Spurs boss. 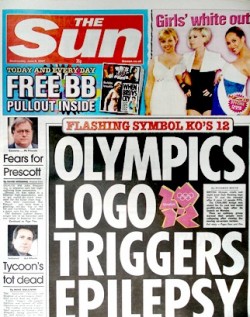 The main players in the Redknapp-for-England story – Harry, the FA and Tottenham’s pokerfaced chairman Daniel Levy – have all been keeping tight-lipped ever since Fabio Capello opted to resign.

So stories we have read to date can only be speculation, but I will now speculate that the first Sun on Sunday will get closest to the truth.

As well as not being able to spell, Harry famously has no knowledge of the computer world, which is just as well because he is spared reading the crippling criticism online of his personal and professional life.

Despite all he has achieved in his three years at White Hart Lane, there remains a lynch-mob mentality among many Spurs supporters who knock him at every opportunity. They were out in force during and following the scrappy draw at Stevenage in a typical FA Cup tie that had Harry joking that this hardly made him fit to be England manager.

Will Daniel Levy manage to persuade him to ignore England’s call to arms?