NORMAN GILLER’s column this week comes with a health warning: if you are a journalist of a nervous disposition, you might want to look away now…

If morale could be measured on a thermometer the journalists at several of our leading newspapers would be considered in need of transfer to an intensive care unit.

I am running out of contacts to talk to at Wapping, where at least six of my old mates have been placed under arrest and are now bailed or gagged. A combination of (alleged) hacking and crossing police palms with silver has brought News International to its knees.

“It’s as if the Gestapo are among us,” one former colleague told me. “There is a department here out of bounds to 95 per cent of us, and behind closed doors they are making decisions that could wreck our lives. They are ready to throw us to the wolves for doing what we were encouraged to do. Who needs enemies when you’ve got colleagues like this?” 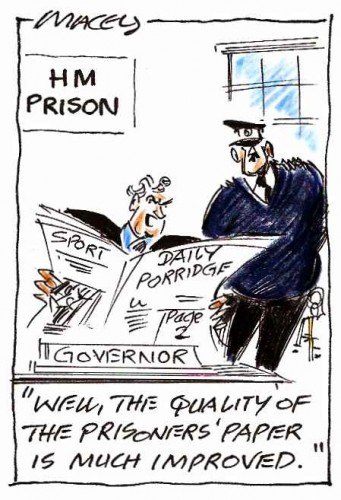 A team of investigators is trawling through at least 300 million emails that could incriminate many more than those arrested to date. I wonder if they will stumble on my 2005 email exchanges with Rebekah Brooks (then Wade), when I was writing the presentation script for her and Andy Coulson to deliver at the News Group annual bash, staged that year in Mexico.

If the police find my emails, can they please ignore the fact that I used to sign off as “the old hack”. That was in the original, pre-phone hacking sense.

Rebekah would be horrified if she could hear the things the Wapping survivors say about her. Many are convinced she was mainly responsible for the decision to shut down the News of the World.

What about the NoW’s mooted successor, the Sun on Sunday? “One minute we’re assured it’s still coming out in April, then that everything has been put on hold.” I was told. “We have produced a stream of dummies, with several former News of the World staff helping out. But we are still in the dark about a launch day.”

Over at the Trinity Mirror, the mood is equally morose. There is barely concealed rage that chief executive Sly Bailey collected a package of pay and pensions estimated at £1.7 million while plans were in progress to axe 75 jobs across the group.

“The mood is to strike but that could be shooting ourselves in the foot,” an insider told me (how’s that for modern reporting “style”?). It doesn’t make sense that we are making these cut-backs just as the Wapping titles are losing confidence and are ripe for the taking.”

How Sly Bailey can look in the mirror (pun intended) is beyond me. To fill her purse with rewards while so many of her employees fear for their future is obscene and hardly conducive to a happy work force.

Meantime over at Telegraph Towers the tsunami of turmoil continues, with 30 journalists waiting to be made compulsorily redundant.

The management, I am informed, claim the cuts are needed to invest in new digital services. How about that for making ink gush from the cut wrists of newspapermen and women?

Of course, all of this could be considered conjecture – which is something the Football Association would like legally banned when discussing the appointment of the next England manager.

That is a demand that can take pride of place in the long history of Monty Pythonesque episodes at the sweet FA – or at least second place to the kiss-and-tell hanky-panky involving Faria Alam and svelte Sven.

The freedom of the press is facing enough danger as Lord Leveson conducts his inquiry. If we go down the road where even reasonable conjecture is considered illegal, we might as well all pack up and leave it to the PRs and spin merchants to inform (and misinform) through unchallenged press releases.

Mind you, we do not help ourselves. Within a few hours of Capello quitting the Mirror was running a front-page exclusive, giving a full breakdown on what Harry Redknapp will earn as the new England manager. I know for a certain fact that Redknapp had not even been approached for the job at that time.

In the new climate, journalists must go in for truthful reporting. If the Mirror had presented its story as speculative, it would have been acceptable (though hardly front-page material). But to present their “exclusive” as fact gave the FA ammunition for its argument.

That story just did not ring true. I am close enough to those events to be sure that it was all news to Harry. Now if they had waited another 72 hours …

I will shake off my Victor Meldrew mood before next week’s column, but that might just be conjecture.

Farewell “Elbows”, and thanks for your help

FAREWELL Alan Hughes, a man who played a huge part in my development from green journalist to a reasonably efficient sportswriter. He was chief sub-editor on the Daily Herald sports desk when I arrived at Endell Street from the Evening Standard at the know-all age of 22 in 1962.

We had a nickname for Alan: Elbows Hughes. Every bit of copy that landed on the desk ended up in piles pinned under Alan’s elbows. He never ever blew his cool except if anybody dared touch the copy before he had assessed it and earmarked its place in the page.

A Brummie who could talk for Britain, Alan always had time to give advice to a young journalist learning the subbing ropes and I will always be grateful for how he helped guide me down that road marked the three As: Accuracy, Accuracy, Accuracy.

Rest easy, old friend. We shall all raise our elbows to you.