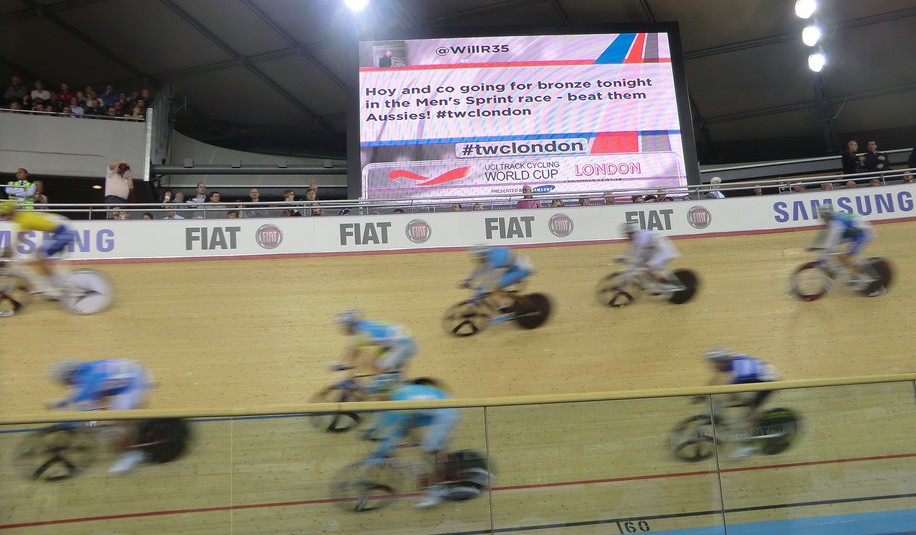 Preparations for the Olympics are cranking up with some of the highest profile venues in the park getting tried out for the first time. PHILIP BARKER, notepad in one hand, digi-cam in the other, reports on media arrangements at the cycling World Cup

The last time any of us saw inside the Olympic velodrome, it was still a building site. Chris Hoy was riding a bike on the track, though.

That was nearly two years ago. Yesterday, Sir Chris was back on the track, but this time in earnest, racing in the first competition to be staged in the £105 million venue.

To walk into the Olympic cycling arena this week was to be hit by a wall of sound from a packed arena and the sight of the feverish activity in the centre of the track. All the teams are assigned an area where the final tweaks to their bikes are effected. All, incidentally, within easy reach of a loo, installed close by at the insistence of none other than Sir Chris himself.

This weekend is not, yet, the complete Games experience we can expect come July. The velodrome is architecturally impressive from outside, if you can approach on foot. But for this weekend’s World Cup, most of the full-house 6,000 spectators are being bussed in (so this is what Boris has done with the loathed bendy busses), across the Olympic Park which is still a work site.

Almost as confusing as the wall of sound that greets you upon entry at this key pre-Games test event is the multitude of different races, including the omnium, new for London 2012. This is meant to be a test of a range of cycling ability, with six different events.

Then there’s the points race, where riders go for 120 laps of the track with a sprint every 10th lap. This information was helpfully put on the big screens, but those covering cycling for the first time at the Games would be well advised put in a bit of homework ahead of time.

Printed information was available in the media workroom and up in the tribunes, distributed by the ever enthusiastic band of runners. Managing the information is invariably a challenge in a sport like this, where so many results are available in so many ways.

The mixed zone is in the middle of the track and you reach it by a subterranean passage. It is certainly advantageous to be able to watch the races unfolding around you, but the sheer wall of sound, the combined efforts of the sound system  and crowd, makes it difficult to hear your own thoughts, let alone those of the riders.

British cycling boss Dave Brailsford, a pre- Beijing SJA lunch guest, has seen his sport undergo a radical transformation in terms of profile. Picture stories on the front pages of three national dailies today underline the amount of attention – and expectation – on Britain’s cyclists. “You turn your telly on and you see Chris Hoy with his bran flakes then he is having a shave and Vicky Pendleton doing all her stuff… it’s a different world that we live in now,” he said.

“The media coverage has changed dramatically.Whereas previously, we were used to cycling specialists, that has really broadened out now.

“In order to create a real interest, beyond the cycling enthusiasts, then you have got to get the mainstream media on your side and work at supporting it. Most of the more experienced riders are used to the media but we’ve beefed up our operation in terms of trying to handle that side of it,” Brailsford said.

Organisers said that almost 900 press from across the world had been accredited for the World Cup. This figure included broadcast technicians. Over the first two days, the media population was around 150 and the media stand and workroom always appeared well populated. At Games time, the room will have 160 working spaces. The tribune will accommodate 220 during the Games, with more than half of these places are tabled.

To the chagrin of some, it was only tea and coffee within the press workroom; we were assured that more substantial catering will be on offer for the Games themselves.

At least there were catering outlets at the venue, but as one colleague on a deadline observed, there was a queue and time was tight (although that begs the question -couldn’t they have waited to eat after they’d filed?). The public refreshment stands did seem a little pricey, if the chocolate (all from Olympic sponsors Cadbury’s, naturally) was anything to go by.