While the world’s Olympic and Paralympic competitors are in heavy training for the London Games, so, too, should be the sports journalists who will be covering the event. Here, a panel of SJA contributors, including ANTON RIPPON, SYBIL RUSCOE and STEVEN DOWNES offer some recommended reading 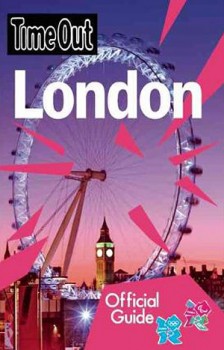 It will be difficult to find more comprehensive coverage of London’s sightseeing attractions, eating out and shopping possibilities than that contained in Time Out London 20th edition: Official Travel Guide of the London 2012 Olympic Games and Paralympic Games (Time Out, £12.99).

With a reputation as the undisputed authority on London life, it was no surprise that Time Out was appointed the official travel publisher of this year’s Games. The guide aims at offering visitors how to get the best from their time in the capital. Advice on the regular tourist trail is complemented by independent reviews of 1,000 venues covering everything from West End shows to pubs, not to mention the pick of the Cultural Olympiad and a guide to the sporting highlights. AR

In training for the Olympics, all journalists need to be prepared to carry a copy of a Wallechinsky, in addition to their notebook and laptop. Weighing in at at least 2lb (in paperback format), the 1,300 pages of The Complete Book of the Olympics has over the past couple of decades become an indispensible part of every sports writer’s kit bag, carrying all the results of every event at every Games since 1896.

David Wallechinsky, now an NBC Olympic commentator, attended his first Olympics in Rome in 1960 with his father, Irving Wallace. His quadrenniel Olympian effort is anecdote-rich, as well as stats heavy. Each edition (this is his ninth) is always fresh and fascinating. Now co-authored with Wallechinsky’s nephew, Jaime Loucky, it is to be published by Aurum Press at £25 – but don’t confuse it with a slimmer volume of Olympic lists which is being pushed out later this month. SD 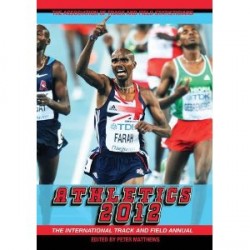 All journalists attending the London Games will be forced to fork out £150 for their access to the LOCOG online data and news service. But many experienced athletics and swimming journalists may not choose to rely uponthe tablets handed down by the organisers.

Track and field specialists will surely arrive at Olympic Park armed with a copy of International Athletics 2012, the Peter Matthews edited stats-filled delight (£19.95, published in May by SportsBooks, the Cheltenham-based concern of SJA Treasurer Randall Northam), offering form and profiles of the leading contenders for medals. And the book never goes offline nor do you lose the connection. SD

They may very well also be armed with an online subscription for www.tilastopaja.org, compiled in Finland by one of Matthews’ international stats colleagues, Mirko Jalava. This site helps bring the dry stats lists to interactive life. As well as all-time and 2012 rankings, it also provides complete individual career records, as well as vital head-to-head details and a range of other wonderful bits of info that can help to shore up even the flakiest of pieces on the most unknown of new champions.

Those taking the plunge at the Aquatics Centre are recommended to seek out the stats lists of Canada’s Nick Thierry, who has been behind www.swimnews.com definitive guide to swimming for nearly 20 years. SD

The Olympics are coming home. Born Out of Wenlock: William Penny Brookes and the British origins of the modern Olympics by Catherine Beale explores the story of how the Wenlock Olympian Games in Shropshire were the inspiration for the modern Games. This year the original Olympian Games are being staged in Much Wenlock from July 8 to 15. SR

The CAMRA Guide to London’s Best Beer Pubs & Bars will help visitors find and appreciate the great beer on sale in London during Olympic year.

The guide includes in-depth reviews of 250 of the best pubs, bars, shops and restaurants that stock great beer in London, as well as information and tasting notes for the beers you’re most likely to encounter.

Together with profiles of all the breweries currently operating in the capital, and detailed full-colour maps featuring transport links, this is the book for all lovers of good beer, whether they regard themselves as Olympian drinkers or otherwise (CAMRA, Members: £10.99 Non-Members: £12.99). AR 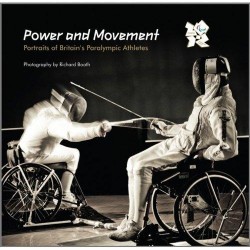 Power and Movement: Portraits of Britain’s Paralympic Athletes by Richard Booth contains more than 180 extraordinary photographs exploring the power, grace and dedication of Paralympians with useful insights into the athletes and their disciplines. SR

How to Watch the Olympics: Scores and laws, heroes and zeros – an instant initiation to every sport (Profile Books, £10.99) is a snappy, amusing work using the simple formula of providing a chapter on each of the 26 Olympic sports from archery to wrestling, via hockey and rowing.

It is a book that entertains as it informs us about everything from handball and Greco-Roman wrestling to the development of synchronised swimming. Diagrams help to explain the rules and finer points of each sport.

David Goldblatt, well known for his history of world football, The Ball Is Round, is also the co-author of a book called Global Transformations: Politics, Economics, Culture, while his accomplice here, Johnny Acton, is apparently responsible for The Sausage Book: The Complete Guide to Making, Cooking and Eating Sausages. So between them, they know a thing or two. AR

London 2012 Olympic Games: The Official Book: An Official London 2012 Games Publication (Carlton Books, £12.99) produced by PA Sport and published in April says it will be “a stunning illustrated guide to the world’s greatest sporting event and essential reading for sports fans everywhere. Packed with glorious photography and expert analysis of the star athletes and their prospects at the Games … is an authoritative and comprehensive preview of the 30th Olympiad. The book features a guide to each of the Olympic Games sports and venues, a brief history of the Games and the competition schedule to ensure you won’t miss a moment of the Games.” AR

Written by a minister of the Free Church of Scotland, Running The Race by John W Keddie tells much more than the Chariots of Fire version of the Eric Liddle story. The book examines the physical and spiritual dimensions of Liddle’s life, and his missionary work in China. It’s the story of a sporting celebrity with a soul. SR

Forget the big names and the big brands – Caroline Loncq’s Rather London takes you to the top locally owned London hotspots for shopping and eating. A bit different than the usual city guides and it may just introduce you to some of London’s more exciting and eclectic neighbourhoods. SR

That London is to stage the Games for a third time has an element of justice about it, since on the two previous celebrations, Britain had taken on the Games at late notice when the IOC was let down by other cities. Bob Phillips’ The 1948 Olympics, published five years ago, gives an informed, loving portrait of the Austerity Games, which were done on a make-do-and-mend basis and cost £750,000 – about £77 million in today’s terms, a long way short of the £9.3 billion 2012 budget. SD 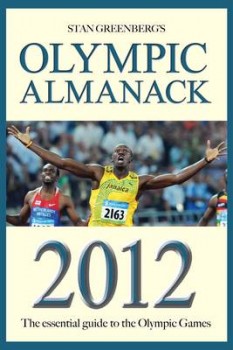 Anyone who wants to pack a slightly lighter weight tome for reference will need Stan Greenberg’s Olympic Almanack 2012 (SportsBooks, £12.99) in their briefcase (or rucksack).

Written by the former BBC athletics statistics wizard, the Almanack, now in its eighth edition, contains an extensive and entertaining collection of facts and figures from Athens 1896 to Beijing 2008, plus the ancient Games at Olympia.

There is coverage of every summer and winter Games with detailed descriptions of venues, sports, competitors and records. Add all that to medal tables by sport and by year and you have the most comprehensive work of Olympic reference. AR

All eyes will be on Usain Bolt this summer. So if you want to know more about him, you can do no better than buy a copy of Usain Bolt: The Story of the World’s Fastest Man (SportsBooks, £7.99) by award-winning sportswriter Steven Downes.

Downes has followed the career of this athletics phenomenon ever since he grabbed an interview with the 16-year-old star turn of the 2002 world youth championships. So he was best-placed to write the biography of a sportsman whose fame now transcends his nationality, his race – and even his sport.

This is the story of the man whose attraction is such that more than 1 million people applied for tickets to watch him run a race in August that will be over in less than 10 seconds. AR

For visiting journalists, Nick Hornby’s Fever Pitch accurately portrays the atmosphere of London and the unique passion of British sports fans. Perfect for sporting journalists for whom football is a mystery. SR