IN more ways than one, Sunday’s 40th running of the London Marathon will be different from the previous 39. Only four photographers have received press accreditation for the 2020 race.

Mark Shearman will not be one of them, which is a great pity, since the 77-year-old freelancer from Surrey had hitherto covered every race since 1981.

Covid-19 not only sees the event restricted to elite runners in a special “bubble” around St James’s Park, it also means that Shearman’s remarkable run will be broken. He is, he says, “very disappointed”. 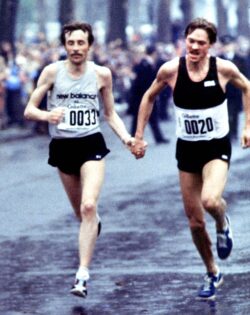 The photographer’s image of Dick Beardsley and Inge Simonsen holding hands as they crossed the finishing line as joint winners in 1981 set the ethos for what the London Marathon was to become. This year, however, Shearman will be simply an interested spectator. It is going to feel odd.

He is, though, hopeful that if the Olympic Games is held next year, then he will be able to return to Tokyo, where his sports photography journey began in earnest, 56 years ago.

He told the website Inside Croydon: “In 1964, for the first time I saw people wearing face masks in public. Japanese people having always worn masks when they have a common cold. Next year I would imagine there will only be a few people not wearing a face mask.”

“I had no press accreditation in 1964,” says Shearman, who was awarded an MBE in 2014 for services to sports photography. “I bought seat tickets like any other spectator then moved around the stadium to whatever area I wanted to work from, sometimes having to climb over fences. For the Games in 2021 it will be very different, as I have full accreditation so will have full access to the areas I want to work from.”

The journey to Japan next year will also be much less complicated. “Today you can fly direct from London to Tokyo in around 12 hours. In 1964 it took three days, with stops in Brindisi, Damascus, overnight in Karachi, Bombay, Bangkok, overnight in Hong Kong and then Tokyo.”

Few can match Shearman’s track record. From Ann Packer winning gold in Tokyo in 1964, though to Usain Bolt bursting on to the world stage in Beijing in 2008, to Mo Farah’s gold medal triumphs over the past decade – Mark Shearman has been there to record it all. 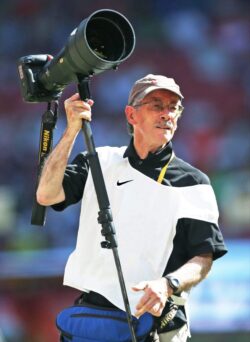 There is so much history packed into his work. In the early 1980s, it was Shearman’s portfolio of photographs of a teenaged running prodigy, Zola Budd, testing her running against ostriches on the South African veldt, that brought her to the attention of the Daily Mail and that she was qualified to run for Britain.

Shearman (left) also has a unique archive of photographs of Sebastian Coe as a youngster training on the hills of Sheffield for his record-breaking feats which ultimately led him to become the head of world athletics.

Shearman joined a photo agency straight from school, and in his early 20s he worked as a photographer at the Central Office of Information. His first steps in professional sports photography came at a meeting at Tooting Bec in 1962, where Trevor Burton was attempting to break the British pole vault record.

Shearman captured the moment and, at the suggestion of his brother, sent a picture on spec to Athletics Weekly magazine, which made full use of the image.

“They couldn’t have had many pictures sent in that week because they used one of mine on the cover,” says a modest Shearman.

Since that day, almost all of Britain’s national newspapers have used Shearman’s work, and his images have featured on the covers of Running Magazine, Runner’s World, Athletics Today and The International Track and Field Annual.

For most of his career, Shearman has been the official photographer for athletics’ national governing body in Britain, and in his 58 years behind the lens he has rarely missed a national championship.

A former sub-three-hour marathon runner, he is still deeply involved as a vice-president of his local club, Croydon Harriers, which last weekend celebrated its centenary with relay run – socially-distanced, of course.