Just 25 days elapsed between the last major event of a uniquely damaged season and the thud on my doormat announcing arrival of football’s pocket encyclopedia.

It seemed the ravages of Covid-19 would inevitably delay publication of the Nationwide Football Annual just as it delayed completion of the 2019-20 football season. 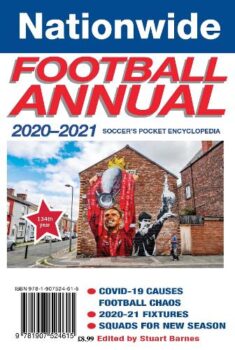 It has not even been slimmed down to facilitate earlier printing and as usual football facts and figures cascade off the 544 pages like melting snow off a sloping roof.

Miracle is a much over-used word in sporting terms but editor Stuart Barnes has certainly performed an amazing feat getting his publication into shops so soon after football hostilities ceased.

Barnes astutely summed up proceedings by remarking in his opening comments: “It was the season like no other caused by a disease like no other. It forced football into hibernation and left clubs with severe financial consequences.”

Indeed it was the season we said farewell to cash-strapped Bury, expelled from the league after  125 years for failing to pay bills. After the annual went to press Macclesfield, turfed out of league two with a 17-point deduction, were wound up after failing to pay tax bills.  How many more clubs will follow if Covid-19’s grip continues to dictate matches are played behind closed doors ?

The annual features all of its usual records and statistics relating to league, European and International football as well as regular features such as player obituaries, football milestones and transfer trail  with Scottish, Irish and Welsh competitions included. One can only speculate how many forthcoming fixtures and events listed between its covers will be fulfilled if Covid-19 gathers strength for a second wave.

Maybe this issue will become a collectors item recording the Covid-19 enforced interruption, early conclusion to many leagues and the stuttering restart in Premier League and Championship grounds devoid of fans. Even the Royal Box was declared out of bounds for health reasons on FA Cup Final day.