As BT Sport prepare to broadcast the Ashes series live for the first time, PHILIP BARKER looks back at how TV coverage of the great cricketing duel between England and Australia has evolved since the days of grainy news reels.

On reflection, it wasn’t that surprising that David Warner should fire the first salvo of the Ashes.

“As soon as you step over the line its war! You try and get into a battle as soon as you can,” he told the Australian Broadcasting Commission last month.

With the world situation as it is, some reproached Warner for his choice of words, but it has been ever thus since the first test 140 years ago.

After a quarter of a century of Sky Sport ruling the roost, BT Sport now have live Ashes rights for the first time.

We’ll take impeccable high definition live coverage for granted, but it is easy to forget that it wasn’t always like this. 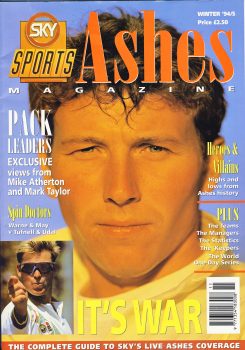 The late SJA member Frank Keating once wrote lovingly of school days when wireless meant a radio. “I twiddled through the hiss and crackle, strident squeals and seashell static.”

Most of the time the tidings from Oz were grim. It wasn’t until 1974-5 that an Ashes series in Australia was even televised in colour – 30 minutes a day of highlights provided by the ABC.

“There’s been no more controversial pitch preparation in the history of Anglo Australian test matches. There were suggestions that the pitch itself was a mudheap,” intoned Richie on opening night.

The Gabba’s controversial emergency groundsman Alderman Clem Jones also happened to be Lord Mayor of Brisbane. He prepared a pitch that was lively to say the least.

England all-rounder Tony Greig bowled bouncers at the Aussies and further aggravated them by signalling every four he struck off Dennis Lillee or Jeff Thomson. Even so England lost convincingly.

By the time the Daily Mail’s Ian Wooldridge arrived later in the series, matters had deteriorated still further.

“You knew they’d been at each other’s throats but you couldn’t believe it was this uncompromising, this violent or this uncouth.”

Wooldridge was still a babe in arms in 1932 when Douglas Jardine took his side out for the most infamous Ashes series of all.

Jardine cut a diffident figure in front of newsreel microphones, but that only disguised a ruthless streak. He set a leg side field and ordered his two fast bowlers Harold Larwood and Bill Voce to pitch it short.

Aussie superstar Don Bradman was the particular target. In those days helmets were unheard of.

That Christmas, King George V had broadcast to listeners in the British Empire. He described this as  ‘one of the marvels of modern science’. 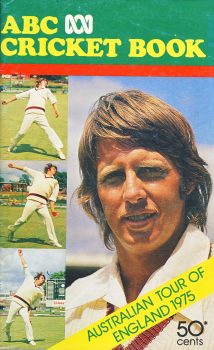 This marvel did not yet extend to providing live radio coverage and the only moving pictures of the action were seen on newsreel days or even weeks later.

Legend has it that Australian journalist called Hugh Buggy coined the name “Bodyline”. It was said that he had insufficient coins to send a telegram stating “line of the body” though fellow journalists Jack Worrall and Ray Robinson also used the term.

After the rebel world series cricket in the late 70s, Kerry Packer’s Channel Nine won the rights to televise official cricket.  It was their coverage the BBC used to show live coverage of an Ashes test in Australia for the first time in early 1983.

England had won the previous test by three runs. Incidentally viewers in Australia missed the vital last wicket because of an ad break.

Although Channel Nine offered superb coverage with many more cameras than the Beeb, many were uneasy about gimmicks which included Daddles the Duck to accompany batsmen making nought back to the pavilion.

Undaunted, the BBC promised “at least the first two hours” of the fourth day of the final test.

BBC Sport supremo Jonathan Martin said:  “The match could turn on the outcome of play in the first two hours. Decisions about further live coverage will be taken according to the state of the game.”

Christopher Martin-Jenkins introduced it all but it soon became likely to peter out into a draw. The cost of a day’s play was estimated at £25,000, so the Beeb bailed out. It was back to highlights in 1986-7 for Mike Gatting’s victorious tour when even Elton John became part of the entourage.

Finally came live coverage, provided by Sky Sports in 1990, though the first full day of the series was dubbed an ‘insomniacs nightmare’ by the Daily Telegraph, so dominant were the Aussies.

In fact Sky only televised an England series victory on Australian soil once. That was in 2011 and was neatly framed by two 5-0 victories for the men in the ‘baggy greens’. 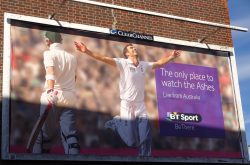 BT will be hoping better fortune attends their Ashes debut.

Their line-up is familiar enough. Geoffrey Boycott is one of a select club to have been part of two victorious England sides in Australia. He will be supported by Graeme Swann, instigator of the sprinkler dance, and Michael Vaughan.

The Australian point of view comes from Adam Gilchrist and Ricky Ponting while 2013 SJA Sports Broadcaster of the year Alison Mitchell will present.

It’s all a long way from going to bed with a crackly transistor radio under the pillow.