County champions Middlesex meet Essex this week in the first match played at Lord’s this season. They will do so in front of a new landmark which bears a familiar name.

The updated Warner Stand boasts solar panels, recycles rain water and will probably win every prize going for sustainability. It is named in honour of Sir Pelham Warner, known universally as “Plum”, a stalwart of Middlesex and Lord’s, who captained England to an Ashes victory. He was also arguably cricket’s first media giant.

In 1903 Warner skippered the first England team to tour Australia under the aegis of the Marylebone Cricket Club (MCC). The players  wore a new dark blue blazer and a cap adorned with St George and the Dragon, a design which endured for almost 90 years.

Warner himself was despatched to the outfitters to collect a sample. It is hard to imagine Joe Root being asked to do the same. Warner enjoyed a successful career on the field and led Middlesex to the County Championship in 1920, his final first class season.

“There have been many greater cricketers than Pelham Warner but none more devoted to the game,” said Wisden editor Sidney Pardon.

Plum continued to play for fun and put his expertise on the game to good use writing for the Morning Post. He also founded The Cricketer.

It is still, despite a number of changes in format, the longest running magazine dedicated to the game. The first issue cost sixpence and appeared on April 30th 1921.

“The editor believes there is room for such a paper as The Cricketer which will endeavour to criticise justly and comment fairly and accurately. The very essence of cricket is camaraderie and good sportsmanship and contributors will strive to write in such a spirit.” 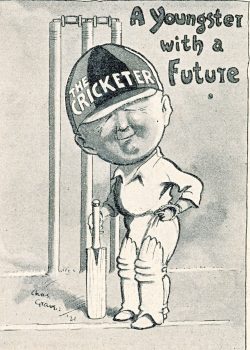 As the BBC spread its wings, Warner put himself forward to speak about the game on the airwaves. The fee offered was five guineas but Warner demanded more.

“If you won’t tell anyone I will make it eight guineas,” responded the BBC’s Director of Education John Stobart.

“I confidently expect that you have (sic) once spoken to the microphone, you will want to form the habit of it yourself.”

Canon Frank Gillingham had already made the first broadcast from a match in 1927, but Warner was the first to do so at Lord’s, for Middlesex v Nottinghamshire.

“The BBC announces that Mr PF Warner  will be the commentator. At 2.15 pm today, from a portable hut erected on the practice field of the ground, Warner will give a ten-minute resume of the morning’s play. At 6pm to 6.10 he will call the score and describe progress of the game which he will summarise when stumps are drawn.”

Though he also covered the Eton v Harrow and Varsity matches that year, his style  was described as a “melancholy delivery”.

When he rang the BBC to complain that another commentator, Teddy Wakelam had been used for matches, the response came back: “Captain Wakelam has nothing like your knowledge of the game, but he is certainly an expert in the art of narrative.”

Thereafter Warner was only used for talks and even then veiled criticism came his way from a senior executive known as  “Lobby” (more formally Seymour de Lotbiniere): “You have a unique store of material to draw on and yet you do not make as much of it as we would like.”

Further Warner contributions were turned down on the grounds that reaction had been “universally adverse since 1922”. For all that, Warner continued to be the heartbeat of cricket.

He found himself in the eye of one of the biggest storms as manager on the infamous Bodyline tour of 1932-33 where he opposed England’s tactics under Douglas Jardine.

It is said they threatened Anglo-Australian relations at diplomatic level. Warner occupied just about every imaginable post at Lord’s. During the second world war, he filled in as MCC Secretary and also succeeded Prince Philip as President. By this time a knighthood had come his way, in recognition of  his contribution to cricket.

On his 80th birthday, they illuminated the ground and displayed his age on the scoreboard. Never before had a stand at Lord’s been named after a cricketer, but in May 1958, the Duke of Norfolk, the incumbent MCC President welcomed Plum to the “Warner Stand” during the Middlesex v Nottinghamshire match.

“Sir Pelham spoke before the microphone ‘extempore’ illustrating his remarks with a thick walking stick which considering his 84 years, he brandished with remarkable firmness,” reported EW Jim Swanton from the new press box.

“The new stand has its critics, not least the BBC who with the press occupy commodious premises on the upper floor. The broadcasting position over extra cover, it was pointed out, is at a worse angle than that of any test ground in the world.”

All the media eventually decamped to the new media centre at the Nursery End of the ground in the late nineties. For this season, portraits of both Warner and Swanton now adorn  a corridor in the Lord’s Pavilion, alongside other writers and broadcasters on cricket including Sir Neville Cardus, Henry Blofeld and CLR James.