NORMAN GILLER on a “truth” widely known to be based on lies for 23 years, and on his admiration for Scotland’s – and Britain’s – finest male tennis player for 70 years 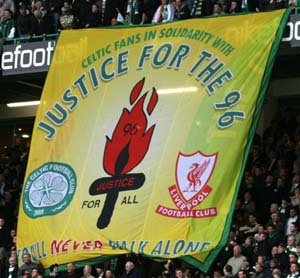 Every journalist has the duty and the responsibility, in the wake of this week’s Hillsborough revelations, to say, “Never never again.”

We must all be committed to always telling the truth, the whole truth and nothing like “the truth” that was presented on the front page of The Sun just three days after the tragedy in April 1989.

Kelvin MacKenzie has at long last said sorry for the way he portrayed the Liverpool fans. He blindly went along with the doctored police version of events that was poisonous spin on a par with the Weapons of Mass Destruction lies that led us into the Iraqi war.

I have known my former Daily Express colleague Kelvin since we were young journos together starting out on our Fleet Street adventures. He has always dived in where others fear to tread, often with an impetuosity that makes colleagues wince.

Old sub-editor team mates of mine were working at The Sun the night MacKenzie made the decision to run with the story. “We tried to warn him,” I was told, “but he decided to publish regardless of the grave doubts about the facts. He said it had come from the police and that was good enough for him.”

MacKenzie forgot a lesson we both learned at the Express, where the creed of renowned editor Arthur Christiansen was still written large on poster boards: “Check and double check your facts.”

Shortly after The Sun splashed the sensational allegations that drunken Liverpool fans had caused the tragic loss of 96 lives, I was in the celebrated Mirror pub, The Stab, where that exceptional news reporter Frank Thorne was holding court.

He had been in Sheffield and was told by the news desk of the Whites Agency story that pointed the finger of blame at the Liverpool supporters. MacKenzie went with it hook, line and stinker, while the sceptical Thorne, along with his Mirror colleague Ted Oliver, took the basic precaution of checking it out with their Anfield contacts.

All they got were angry denials, to the extent where the late, award-winning reporter Oliver told the newsdesk that if they put his name on the story he would resign.

“The Sun headline,” Thorne said prophetically, “should have read THE LIES. I checked it out with enough people to know that there was not a word of truth in it. The police were just covering up the bungled way they had handled the disaster.”

Following the horrors of Hillsborough I was with two of my good Scouse friends, comedian Stan Boardman and comedy actor Ricky Tomlinson, making a TV programme. Stan had been an apprentice at Anfield and was incensed by The Sun story. “You tell that Kelvin MacKenzie,” he said, “that his paper is a disgrace and that he has slandered the whole of Liverpool. I never miss a Reds game and I promise you that story is total rubbish.”

Ricky dropped into Jim Royle mode as he told me: “If I get near MacKenzie I’ll stick his paper up where The Sun never shines. We all know somebody who died or their relatives and friends and our great city is shellshocked. How could they print such lies at a time when we are hurting so much?”

Now, 23 years on, we find out that the likes of Frank Thorne, Stan Boardman and Ricky Tomlinson – and thousands of scandalised Scousers – were right. MacKenzie was embarrassingly and emphatically wrong.

Saying sorry is not enough. That shameful Sun story should weigh on the conscience of every journalist, and there must be a determination and a desire to get the facts right in future. And there must be complete justice for the relatives of victims and for the survivors.

And I wonder what Lord Leveson is making of all this as he watches from the sidelines? I can hear the door closing even tighter on press freedom as we knew it, pre-Hillsborough.

And that’s The Truth.

IT IS BEYOND my ken (or any other name you can come up with) why some blinkered people still refuse to accept Andy Murray as the greatest British men’s tennis player of the last 70-plus years, certainly since I’ve been on this mortal coil. Fred Perry had already become an American citizen by the time I joined the party.

Within minutes of him making our great summer of sport even more glorious by his US Open victory over Novak Djokovic I was having to defend him against searing and sneering keyboard warriors on Twitter and Facebook.

They were more concerned in judging how he behaved at the end of the match rather than what he had achieved during it. I will wait for a correction from my omniscient friend on The Times, Neil Harman, but I cannot think of a better returner of the ball than Andy. I go back to the likes of Jack Kramer, Pancho Gonzales and the golden Aussie era of Laver, Hoad and Rosewall. Andy Murray is fit to be named in the same breath as these tennis immortals.

For those armchair critics who were crucifying him for not smiling during his immediate after-match interview, just go out on a tennis court and run around for five hours with the imagined pressure that you could be the first British player for 76 years to win a Grand Slam. Oh yes, and while you’re about it rip off one of your big toe nails. Then see if you are in the mood to smile.

Many continued to knock Andy because he had once uttered the crushing words: “I don’t want England to win the World Cup.”

Well I have been around Jocks all my working life and have never met one who does not share that sentiment. It has led to years of great rivalry and banter, and I would not have it any other way.

The fact that Andy has taken the traditional route of being a Scot who is anti the English football team should not be allowed to hide the fact that he is true master of tennis.

It would not have been lost on him that it was our England footballers who came along and rained on the summer parade of greatest British sporting achievements in history.

Their stuttering performance against the lively Ukraine team was played out before tier upon tier of empty Wembley seats.

This is a warning not only to the national team but to the over-paid and pampered club footballers that after the magnificence of the London Olympics and Paralympics the public will not dig into their pockets for mediocrity or lack of 100 per cent effort.

And yes, that is The Truth.