One of the most respected figures in British sports journalism, Henry Winter, the football correspondent of the Daily Telegraph, has described the on-going ban of local newspapers from Newcastle United’s home games as “pathetic”.

Last month we reported on a possible breakthrough in the row between Premier League Newcastle United and three local papers – all Trinity Mirror-owned – that has brought press-club relations on to an all-time low and reduced football coverage to a Tyneside farce in which even Brian Rix might have felt embarrassed to appear. 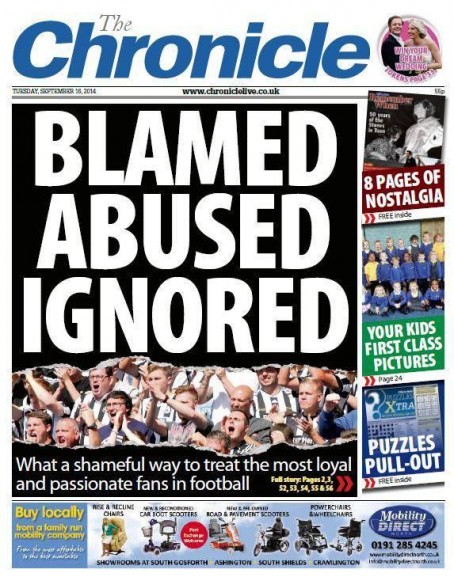 The pantomime that is turning into a saga has been well-documented: last season The Chronicle, The Journal and Sunday Sun were all banned from press conferences and home matches at St James’s Park. The response from the Sunday Sun was to publish, in April, a mocking back page that “accepted” the blame for the team’s poor run of results and apologised to fans.

Recently, though, Trinity Mirror’s new regional head of sport, Mal Robinson, who saw active service with the RAF in Iraq and Afghanistan before becoming a sports journalist, thought he saw some light at the end of this particularly bleak tunnel when United’s manager, Alan Pardew, said in a post-match press conference: “The feeling in the local media and press and our fans is one of optimism. That’s felt on the training ground as well. It’s felt by my staff and some of my staff have been here for 25 years.”

A hopeful Robinson responded: “Fingers crossed, we can get the professional relationship back up as it was before.”

Apparently not. After bottom-of-the-table Newcastle lost 1-0 at Stoke City on Monday – a game at which all the Newcastle local papers were allowed to use the media facilities – the Chronicle’s chief sports writer, Lee Ryder, asked Pardew whether he felt he could genuinely come back from another Premier League defeat.

Oddly, Taylor had no problems with the next question, even though it came from the Daily Telegraph, one of the national titles who have been banned from Newcastle’s home matches.

After the conference, the Telegraph’s Henry Winter tweeted: “Pathetic. Local papers vital for a club, they are family.” Winter has nearly 1 million followers on Twitter.

Ryder, meanwhile, took to print, warning Pardew that he is “running out of journalists to ignore as pressure is cranked up on his future”.

The Newcastle’s “PR meltdown” was harming players, staff and the manager, said Ryder, adding: “Alan Pardew is running out of time at Newcastle United and running out of space to manoeuvre when it comes to addressing the public.

“ … Nobody likes being criticised but when you are the bloke in charge of the team which has banked 19 points from a possible 81 since Boxing Day it is always going to come your way.

In the meantime, the farce continues its run.