There could be a thawing in the Cold War between Premier League Newcastle United and three local newspapers – but it might take a veteran of 21st century war zones to broker it. 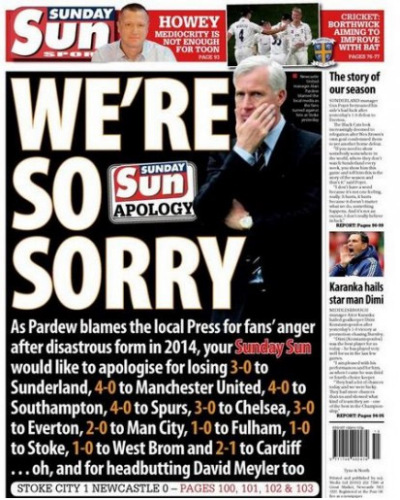 For most of last season the Trinity Mirror-owned Newcastle Chronicle, The Journal and Sunday Sun were given the cold shoulder by St James’s Park, or “The Sports Direct Arena” as it became known (but not by the Chronicle).

Newcastle United’s owner, Mike Ashley, took umbrage for several reasons, culminating in the club’s objection to the way that the papers had covered a fan demonstration in October, when there was a march to highlight disquiet over his ownership of the club, including the stadium name change.

Journalists from the three titles were banned from press conferences and home matches, a move that followed a previous ban on a former Journal reporter, Luke Edwards, for a story about an alleged dressing-room row at Newcastle.

At the time Chronicle editor, Darren Thwaites, said: “We may be banned but we won’t be gagged. We want Newcastle United to be successful but it would be nonsense to pretend that the fans are happy about what is going on behind the scenes.”

Already rocky relations reached an all-time low in April when the Sunday Sun published a mocking apology to Magpies supporters. On its back page, headlined “We’re So Sorry”, the paper “accepted” the blame for the team’s poor run of results.

However, United’s manager, Alan Pardew, recently used a post-match press conference to hint that the ice is thawing: “The feeling in the local media and press and our fans is one of optimism. That’s felt on the training ground as well. It’s felt by my staff and some of my staff have been here for 25 years.” Encouraging words from someone who had previously accused the local papers of having “a bit of an agenda” towards Newcastle United.

Robinson, who before turning to football writing saw active service with the RAF in two 21st-century Middle East conflicts, is hopeful that discussions currently under way with the club will see a restoration of full press facilities for the papers under his charge.

After his appointment last month he told holdthefrontpage.co.uk: “We’d obviously prefer to have full media access but we continue to provide the most in-depth and independent coverage of Newcastle United regardless … Our focus is to put the readers and fans first. We want the club to be successful and win trophies but we remain free to criticise if they get things wrong. If this means our agenda does not always suit that of a football club, then so be it.”

After Pardew’s apparent olive branch, Robinson regards the situation now as “a work in progress,” saying: “Fingers crossed, we can get the professional relationship back up as it was before.”