I’m not sure where I saw it, but a couple of years ago I came across a cartoon in which a spotty-faced youth was asking a gnarled old man – presumably a journalist – about newspapers.

“What?” says the youth, “You mean you used to get stuff off your website, print it on paper, and then sell it?” 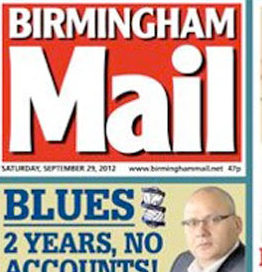 Well, the day has come to pass. Trinity Mirror’s Newsroom 3.1, which envisages content being published online first before being reverse-published into print titles, has already been rolled out in Trinity’s Newcastle, Cardiff and Manchester centres. Now it is the turn of the West Midlands where several sports writing roles, along with the picture desk, appear to be under threat thanks to the introduction of a new-look “digital-first” newsroom.

Ken Montgomery, since 2008 regional sports editor at Trinity Mirror Midlands – so covering the Birmingham Mail, Birmingham Post and Sunday Mercury – but who has been with the Birmingham papers for 40 years, is at risk of redundancy, as is rugby correspondent Brian Dick, who currently covers RFU Championship club Moseley.

The National Union of Journalists condemned the development, pointing out that digital-first moves in Trinity Mirror’s other divisions have not led to job losses. Last month, Chris Morley, NUJ Northern and Midlands organiser, said: “The introduction of Newsroom 3.1 was known to be coming to the Midlands but it has not come with the same level of investment in journalism and journalists jobs as it has done elsewhere.

“Indeed, some of our members have been put at risk of losing their jobs and there is every risk that this might turn into compulsory redundancies. We will be working very hard to avoid that situation so that it does not cast a shadow over what our members feel overall are positive developments for how the newsroom operates.

“The first question our Birmingham chapel will be asking managers is how they believe a four-newspaper newsroom will operate without a picture desk? We hope everything possible is considered for saving the skills and experience of journalists whose jobs have been put at risk.”

Of the main regional centres, only Cardiff now retains a separate picture desk operation with photographers at other centres now reporting directly to the newsdesk.

Trinity Mirror Midlands said that five new roles have been created in the area – which besides the Birmingham papers also covers the Coventry Telegraph – to add to seven digital roles created there already this year.

Trinity Midlands editor-in-chief, David Brookes, said the changes across the Birmingham and Coventry offices will ensure further online growth for the titles: “Many of our journalists are already multi-skilled and feel confident in producing digital content. The new newsrooms will allow them to become truly digitally-led, producing outstanding and engaging content for readers.”

According to the NUJ, jobs created in anticipation of the Newsroom 3.1 roll-out include a football editor, sports writer and senior story editor as well as a grassroots sports curator and a content curator.

Trinity Mirror declined to comment on the impact of the proposed changes on individuals but said that a 30-day consultation process with seven staff was continuing.