Farewell White Hart Lane. PHILIP BARKER was eight the first time he stood on the terraces at  Tottenham’s iconic stadium and he says thanks for the memories.

In recent days, Tottenham High Road has been festooned with banners proclaiming ‘The Finale’. It was fitting that the last match at White Hart Lane would be Spurs against Manchester United.

Back in 1909, United were the first top flight visitors to the ground. The Daily Telegraph writer reported: “Special interest attaches to the match. The Hotspur club for the first time have a league match on their ground at White Hart Lane. To meet the requirements of the large crowds expected to take the opportunity to see the best football in North London, increased covered accommodation has been made.”

In the early 1990s, Nick Hornby’s Fever Pitch was transformed into a memorable ‘rom com’ starring Colin Firth as an Arsenal fan.

A decade earlier, The Observer’s Julie Welch was writing the Glory Glory Game. Part auto-biographical, it was a tribute to 1961 Spurs’ double-winning side and their idiosyncratic captain Danny Blanchflower.

It was lovingly adapted by David Puttnam into a charming film for Channel Four. The designers worked overtime to recreate the classic old stands designed by Archibald Leitch.

Less appealing was the treatment meted out to the heroine Julia, who becomes a football journalist but is effectively ostracised by the rest of the exclusively male press corps (the exception being Blanchflower in a cameo). Thankfully, matters have come a long way since 1983.

The Spurs press boxes have never been the most accommodating. On the night Tottenham clinched the League title in 1961, Eric Todd told his Guardian readers: “The light in the press box was negligible and with a neighbour’s typewriter tickling one’s ribs, note-taking became problematical. This was unfortunate since after half an hour things warmed up.” 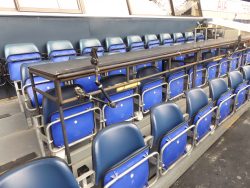 After the rebuilding of the west stand in the early eighties the pitch-level press box remained every bit as cramped as ever. Whatever their emotions about the ground, journalists will be unlikely to mourn the passing of the press box.

So many memories, but where to begin? SJA members Norman Giller and Harry Harris were so fascinated by the old place, they have written books about it.

Spurs first played there in 1899. According to legend, the club was founded some years earlier by some youngsters who met under a lamp post across the road. That Hotspur name was inspired by Will Shakespeare’s Harry Hotspur and reflected the deeds of local landowner Sir Henry Percy.

The ground has even been an Olympic location. Not in 2012, but 1948 when an outstanding Sweden beat Austria en route to gold. Three years later, the Spurs ‘push and run’ team won the League. Alan Ross, known for his elegant writing, described one victory in the Guardian “as darkness came closing steadily in, Tottenham rang rings through it.”

Even that performance was eclipsed in the reign of Bill Nicholson, manager in the glory years of the 1960s. After the League and FA Cup double, Nicholson’s side reached the European Cup semi-final but lost on aggregate to Benfica. Of a pulsating night in North London, the great Ian Wooldridge described it as “the most exciting finale I have ever seen to a football match.”

In 1963 Spurs became the first British team to lift a European trophy. Subsequent teams have found  comparisons odious. In 1972 Jeff Powell wrote  “Tottenham’s forgotten glory glory anthem roared out from the dark stands” but a UEFA Cup triumph sandwiched between two League Cups was only the prelude to relegation in 1977.

Spurs bounced back immediately. Then came one of the biggest sports stories of the decade. Osvaldo Ardiles and Ricardo Villa arrived at the ground only weeks after helping Argentina win the 1978 World Cup. “Spurs scoop the World,” was the Daily Express headline, but it was the Mail’s Brian James who caught the mood: “If Spurs had bought Batman and Robin, they could scarcely have created greater curiosity than surrounds Ardiles and Villa.”

The boys posed with new sponsored cars outside the ground and were a marketing dream. It was a coveted crossover, for even non-football fans had  heard of this dynamic duo. ITV’s Big Match put a camera on Ardiles in his first home match. An early version of ‘Playercam’ perhaps?

TV cameras were not then a regular fixture at the ground. In 1983 Spurs beat Nottingham Forest. No SkySport. This history-making occasion was on ITV – and it was live!

I’d first stood on the terraces in February 1969, aged eight. Behind us was the old television gantry. I never imagined that one day I’d commentate from the top of that very stand.

By 1989, Spurs had started their own TV channel which transmitted  to stadium concourses as fans came in. It was introduced by the legendary Kenneth Wolstenholme, and an invitation to do some commentary came my way. The journey to the gantry was via an awkward and very narrow spiral staircase.

It was worth it to watch from the best seat in the house, especially in 1990 when Paul Gascoigne’s displays in the World Cup ignited Gazza mania.

Tottenham manager Terry Venables observed: “Gazza is finding it hard to run with all the headlines on his shoulders.”

Spurs were amongst the first to offer regular beam backs of away matches which fans watched on the giant and then state-of-the-art jumbotron screens.

Commentary was off tube from a tiny booth in the stand. The away feature was sometimes preceded by a reserve match on the White Hart Lane pitch – which is how on one occasion I came to read out the teams on the public address tannoy, each name accompanied by a cheer, and inevitably a few moments later  those immortal  words “Will the owner of car registration number…”

There was an occasion back in the eighties when the television lights came on after one North London derby. Then Arsenal and Spurs goalkeeping legend Pat Jennings was handed a big red book.

“This is your Life,” said Eamonn Andrews. Many of us felt similarly emotional on Sunday.

Plum lives on in Warner Stand