Trans World Sport is 30 today. PHILIP BARKER pays tribute to the programme which gave him his first job in sports journalism.

It  has become a passport to the great and good throughout the sporting world and the longest-running television programme of its kind in the world.

From the moment the opening titles rolled you’d be likely to find football, tennis, athletics and gymnastics, fighting for attention with the likes of kabbadi, sepatakraw, bodybuilding or bushkashi (a particularly brutal form of polo played in Afghanistan).

It was just the sort of intoxicating mixture that made the programme required Saturday morning viewing on Channel Four for a whole generation of young sports fans including a teenage Gabby Logan.

“Trans World Sport on Saturdays made me want to work in sports tv as much as Grandstand,” she tweeted earlier this year.

She was not alone. Many are hoping the programme will return to British screens soon.

The whole thing had been the idea of Mark McCormack, supremo of the International Management Group (IMG) and at that time arguably the most influential power broker in world sport. His influence went far beyond that. He was also the man who marketed the Pope.

A  monthly itinerary circulated from IMG headquarters in Cleveland, Ohio, revealed that he rarely stayed in one city for more than two days at a time, except during the golf majors and Wimbledon fortnight.

By 1987, his organisation had a television arm, named Trans World International and a growing portfolio of tv rights. McCormack  saw “Sports Anthology” (the original working title for the programme) as ideal for the burgeoning satellite television market.

The international philosophy of the programme was established and by the following spring, a full production team had been assembled at Kew in West London. The programme name reflected its parentage. It was to be simply Trans World Sport.

In 1987 sports such as triathlon, beach volleyball and taekwondo still craved admittance to the Olympic programme. Gender equality remained a long way off. Women’s football and rugby continued to be seen by many as novelties. Even in athletics, women were not permitted to throw the hammer, run the steeplechase or even triple jump.

The German Democratic Republic, or East Germany, was the major force in the sporting world. Although some suspected that this might not have been achieved through superior technique alone, the Berlin wall kept prying eyes away from a state-sponsored doping campaign.

Into the TWS office poured tapes containing film of amongst others, swimming star Kristin Otto and skating sensation Katarina Witt.  In retrospect, these were innocuous, sanitized films but at the time they were fantastically exotic, the first glimpse most of us had of life behind the Iron Curtain.

Viewers were also introduced to the Copa America. The following year it was the turn of the African Cup of Nations long before anyone outside those continents had deigned to cover them. The exuberance displayed was in sharp contrast to English football at the time. The Premier League did not yet exist and clubs were banned from European competition in the wake of the 1985 Heysel tragedy.

A TWS crew journeyed to the Calgary Olympics. As non-rights holders, they were not permitted to show any competition, but still uncovered the story of the Jamaican bobsledders, long before the hit film ‘Cool Runnings’. It was a first step into the Olympic world.

The programme also covered football’s 1988 European Championships in West Germany. Again no match footage was allowed but TWS focussed on the margins. There was no “Fan Zone” just a small marquee on Munich’s Olympic Park with a television and about a hundred ticketless Dutch fans.

The pictures of them enjoying their team’s greatest success started a trend. The cameras rolled as they painted the town orange that night. Now fans’ parks have become an integral part of the broadcast coverage but it happened first on Trans World Sport.

The programme’s record in spotting stars of the future is second to none. Early editions included tennis playing sisters by the name of Williams and a teenage sprint sensation named Bolt.

If the world of sport has changed almost beyond recognition, television production has altered in equal measure. Thirty years ago cameras were bulky and the transformation from raw footage to the finished story was complex and time consuming.

Today footage is gathered on a tape cartridge scarcely the size of a credit card but in 1987 tapes were the size of a small brick. The whole thing was pieced together on a master tape which would then be duplicated and despatched across the world.

Most organisations still used the one inch tape format. These were the diameter of an extra large pizza and three times as heavy. It was necessary to lace them carefully in a Heath Robinson-style machine before they could be played.

Narration was in English but the tape included an international soundtrack stripped of  commentary.  A written guide script was provided for translation purposes – complete in pre-text days with emojis to advise on delivery. Fast or slow, happy or sad.

That first edition was narrated by Gerald Sinstadt, even then a veteran of countless Olympic and World Cups. Others to do so included the late Helen Rollason before Bruce Hammal and Sue Carpenter became regular presenters.

The first show included some esoteric offerings including body building. In those early weeks, the archive curiosities also featured Jesse Owens racing against a horse. That took place 80 years ago.

Rain or shine, the programme is still 52 minutes every week, and you are just as likely to be introduced to the next Tiger Woods, or bog snorkelling.  I’ve been humming the theme tune all week. It was composed incidentally by a descendant of  Richard Wagner. 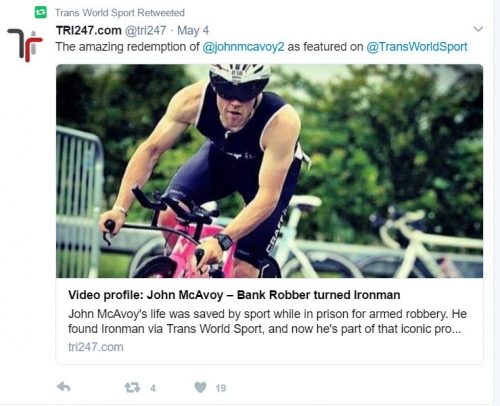 They say you never forget your first job in sports journalism so I will be raising a glass to the old programme. Happy Birthday.