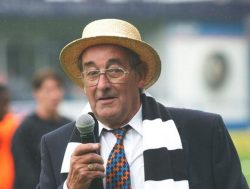 Swain’s love affair with Luton Town started during the Second World War when, aged five, he drifted into Kenilworth Road for a reserve match and was hooked. Later, he even joined the St John Ambulance so that he could sit by the touchline at matches.

He joined the Luton News in 1954, after leaving Dunstable Grammar School, and worked there for four years before moving to the Bolton Evening News. When the paper closed in 1962 he returned to Luton as deputy chief reporter and became sports editor in December 1972. He described it as “my dream job”.

Swain’s travels, covering the club, were legendary but his most memorable journey was when he battled through the snow to Anfield in 1987, only to discover that the game had been called off because the Hatters’ flight from Heathrow had been grounded. An incandescent Kenny Dalglish, Liverpool manager at the time, kept pointing at Swain and shouting: “He managed to get here! Where are Luton?”

After leaving the Luton News in 1997, he spent a further seven years as a freelance, at the same time becoming programme editor for the Town. He retired at the end of the 2004 season.

Over the course of 25 years, Swain reported on the highs and lows at Kenilworth Road. He also became the voice of Luton Town on Chiltern Radio.

‘He dictated everything off the top of his head And it was all totally accurate, beautifully constructed and a pleasure to read and hear’

His most memorable moment came in 1983 when Luton had to beat Manchester City to remain in the First Division. In those pre-internet days, Swain’s bulletins were the only way those who couldn’t attend knew what was happening.

With five minutes to go Mike Vince, the studio presenter, said: “Well, we’re hearing that a goal has been scored at Maine Road and we’ll go over to Brian Swain after this record”, at which point  Brian could be heard shouting in the background: “Put me on! Put me on! Put me on NOW! Luton have scored!”

Denis O’Donoghue, who helped Swain in the Luton press box for 25 years, said: “He was an absolute professional. In all the years I was with him while he was broadcasting and filing reports, I never actually saw him write down a single word of copy.

“He dictated everything off the top of his head. And it was all totally accurate, beautifully constructed and a pleasure to read and hear. He was a remarkable journalist who would have been a great asset to any Fleet Street newspaper, but who chose to stay with the life and club he loved.”

A founder member and later vice-president of the Luton Town Supporters Club, Swain was a keen trade unionist and held positions at regional level in the NUJ.

He and his wife Rosemary retired to Cornwall where he started to watch Falmouth Town. He became club secretary and ran the club for a few years where he was reunited with Luton legend Bruce Rioch, who had moved to the area and who came in to help with the training.

Swain’s health declined over a number of years but he was proud to be able to make the drive to Plymouth last year to see his beloved Hatters one more time.