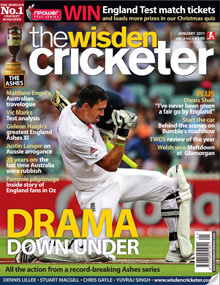 The deal went through on Dec 22 for “an undisclosed sum”, according to a report on Press Gazette.

The title was created seven years ago by the merger of The Cricketer and Wisden Cricket Monthly, and was sold by the Getty family in 2007 to BSkyB.

Last year it averaged a monthly circulation of 32,599, according to the Audit Bureau of Circulations.

Editor John Stern and his staff will remain in place in their Victoria offices, while Andrew Bordiss, former deputy editor of the Evening Standard, is the title’s new managing director.

In a statement issued following the takeover, Bordiss said: “The Wisden Cricketer speaks with an independent and authoritative voice.

“We will merge this impressive magazine operation with the Test Match Extra website, which features brilliant commentators such as Jonathan Agnew and Christopher Martin-Jenkins, and create the definitive media platform for English cricket.”