ANTON RIPPON saddles up again for more period tales that could be scenes from Downton Abbey or Upstairs Downstairs. Except this really happened 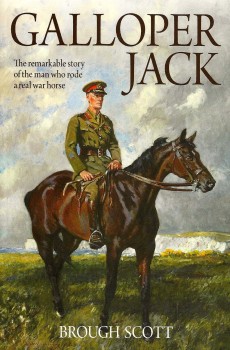 Let me explain. In 2003, SJA member Brough Scott, three times the Sports Feature Writer of the Year, noted television presenter, editorial director of the Racing Post and a former jockey who rode at Aintree and Cheltenham, had published Galloper Jack: A Grandson’s Search for a Forgotten Hero, the biography he had written about his grandfather, General Jack Seely.

In 1934, Seely had published his own book, My Horse Warrior, and last year Racing Post Books republished this as Warrior: The Amazing Story of a Real War Horse with additional notes by Scott.

Now the firm has also republished Scott’s 2003 work, this time re-titled Galloper Jack: The remarkable story of the man who rode a real war horse, all timed, of course, to ride on the back of the fictional war horse of Michael Morpurgo’s novel – called, as we all know, War Horse – which has successfully completed transfer from West End stage to screen with a Stephen Spielberg film.

Now we have all that out of the way, let’s talk about Scott’s reissued biography of his grandfather.

“Galloper” Jack Seely was at the heart of some of the most important events of the first part of the 20th century. His early life was one of adventure, sailing to the Antipodes, saving the crew of a French ship wrecked off the coast of the Isle of Wight, and later raising a calvary squadron and joining the Boer War, where he was awarded the DSO for his bravery.

As if all that wasn’t enough, on his return to England he was elected Conservative MP for the Isle of Wight, but like his close friend Winston Churchill, later crossed over to the Liberals.

In 1912, Seely was appointed Secretary of State for War with a seat in Asquith’s Cabinet, but in 1914 disaster struck in the shape of the Curragh Mutiny, when 57 out of 70 British Army officers resigned their commissions rather than take up arms against the Ulster Volunteers who opposed Home Rule.

Seely’s part was to add two concessionary paragraphs to a Government document designed to get potentially rebellious generals back in the fold. It is Scott’s not unreasonable assertion that his grandfather had been placed in invidious position in being asked to square an impossible political circle.

Forced to resign, Seely was sent to the Western Front and there made his name as a humane and innovative leader. It was where he rode his own war horse: Warrior, the powerful bay charger standing 15.2 hands, bred by Seely on the Isle of Wight in 1908.

Seely would lead what was probably the last great cavalry charge in history, at the Battle of Moreuil Wood in March 1918; Warrior would survive shot and shell – the awfulness of battle described here is hair-raising – and after the war he returned with his mount which, ridden by a stable boy, won a lightweight race at the Isle of Wight point-to-point in March 1922. In some ways this truth seems even more remarkable than the current fiction.

Indeed, if Galloper Jack had not existed, it may have been necessary to make him up, adventurer, soldier and politician that he was. The experience on the Western Front fundamentally altered Seely’s opinions of battle, seeing him form an insistence that there should never be another world war, which led him to embrace appeasement without questioning the Hitler regime. It was a decision that would haunt him for the rest of his life.

As for Brough Scott, while he has related his grandfather’s remarkable story with obvious affection, it is also an honest tale told with candour and remarkable objectivity. Perhaps someone should make a film of it?