Brough Scott has republished his grandfather’s tribute to his loyal and brave charger, with a book that fascinates ANTON RIPPON

There can’t have been many horses throughout history that warranted an obituary in The Times, especially not one whose sporting pinnacle was winning a lightweight race at the Isle of Wight point-to-point.

But then no other horse did that four years to the day after leading a cavalry charge during one of the most crucial battles of the First World War.

These days, when we think of a war horse, we think of the fictional Joey, star of Michael Morpurgo’s novel War Horse, which is soon to complete transfer from West End stage to screen with a Stephen Spielberg film.

But Warrior’s story was very real, and his story no less astonishing as Joey’s. A powerful bay standing 15.2 hands, Warrior was the charger of an army general and MP who sat in the British Cabinet alongside his great friend, Winston Churchill. 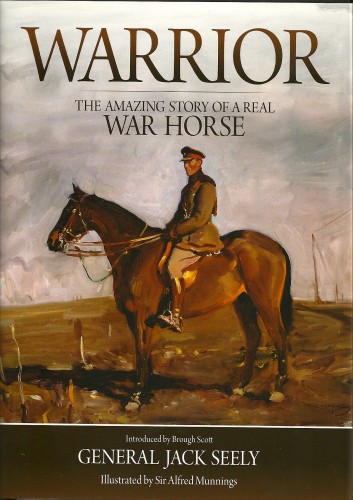 The general also has a famous grandson, SJA member Brough Scott, three times Sports Feature Writer of the Year, TV presenter, editorial director of the Racing Post and a former amateur jockey who rode at Aintree and Cheltenham. In 2003, Scott published Galloper Jack: A Grandson’s Search for a Forgotten Hero, a biography of General Jack Seely that told a more rounded story than either of Seeley’s autobiographies, which bore such titles as Adventure and Fear And Be Slain. The old general had many qualities but modesty was not apparently among them and Scott sought to provide a more objective view.

But when he came to tell the tale of Warrior, a legend in his family, Scott soon realised that it would be a presumption to try to better the story that had been already told by the man who had shared Warrior’s life from its cradle to its grave when the horse was 33.

So he has republished General Seely’s own account of the horse, first published in 1934 as My Horse Warrior, and now in bookshops again as Warrior: The Amazing Story Of A Real War Horse, complete with the wonderful illustrations produced especially for the work by Seeley’s friend, the renowned war artist Sir Alfred Munnings.

It is hard to imagine that any horse and rider could have shared such a sustained series of adventures as did Warrior and Jack Seely.

Seely was there when the horse was born, in the spring of 1908 at Yafford on the Isle of Wight. They immediately formed a bond and six years later walked off a boat together at Le Havre as part of the British Expeditionary Force sent to France after Germany had invaded Belgium.

It would be Christmas 1918 before Warrior saw the Isle of Wight again and it seems a miracle that he survived four years of a war in which he saw action at Ypres (where he was sometimes ridden by the commander-in-chief, Sir John French), on the Somme, at Paschendaele and at Cambrai before leading the charge at Moreueil Wood during the great German spring offensive of 1918.

Of the 1 million horses sent by Britain to the Western Front, more than 900,000 did not return, and if Warrior perhaps enjoyed better stabling than most, he was certainly never spared in battle.

Twice he was buried by the bursting of big shells on soft ground, and the Canadians – Seely was now commanding the Canadian Cavalry Brigade – dubbed him “The Horse the Germans Can’t Kill”.

Seely wrote: “I have seen him, even when a shell burst within a few feet, stand still without a tremor – just turn his head and, unconcerned, look at the smoke from the burst.”

After the war, Warrior became the family hunter on the Isle of Wight, on March 30, 1922, he won that point-to-point race, ridden by “Young Jim”, the stable boy who had brought him into the world. Warrior’s sire, Straybit, had won the same race 15 years earlier.

In the spring of 1941, Warrior was ailing and Jack Seely, by now Lord Mottistone, the Lord Lieutenant of Hampshire, bowed to the inevitable, although he stipulated that the end should be delayed until he had left. He could not bear to be there for the closing.

There is no grave. In an Epilogue to the book, Scott writes: “ … I spoke with an old man who as a farmer’s boy had seen the vet arrive and the knacker’s van come and go.” He told Scott: “You must remember that it was wartime. Everything was needed. Even Warrior.”

Warrior: The Amazing Story Of A Real War Horse by Brough Scott with a foreword by Sir Peter O’Sullevan (Racing Post Books, £14.99)